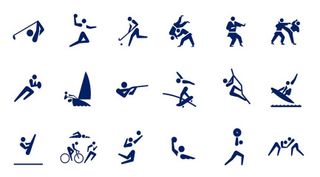 The Tokyo Organising Committee of the Olympic and Paralympic Games has revealed over 70 new pictograms depicting every sport in Tokyo 2020 – and for the first time in the history of the event, the images are animated.

The beautiful designs, covering 33 Olympic sports and 22 Paralympic sports, were animated by Japanese motion designer Kota Iguchi. They each appear as blue fragments on a white background before showing a short sequence of the sport in motion, freezing for a moment, then disappearing.

"It took more than a year to create them," says Iguchi. "I hope that they will brighten up each of the events." We've no doubt that they will – we're suckers for a cool piece of animation (check out our favourite css animation examples). We've been staring at the archery design for hours:

It's fitting to see the world's first kinetic pictograms introduced by Tokyo 2020, since it was Tokyo 1964 that brought us the first static pictograms. According to the Tokyo Organising Committee, the original pictograms "arose from a need to communicate visually with an increasingly international group of athletes and spectators".

The Olympics are a haven for graphic design fans, and Tokyo 2020 has led to some truly stunning commissions. We particularly loved these minimal Team GB designs revealed by Tom Pigeon last month. Tokyo 2020's kinetic pictograms will appear at competition venues, as well as across the games' official website and social media. Find out more about the kinetic pictograms on the official Tokyo 2020 website, or see more of them in action in the video below.