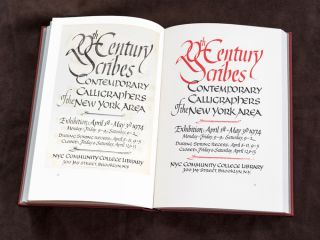 The work of one of the world's major modern calligraphers is to be celebrated in an upcoming book that collects together a wealth of previously unpublished material. Known professionally as just Alice, the work of Alice Koeth preceded the rise of calligraphy fonts, inspired generations of calligraphers, and appeared on Madison Avenue and posters for the Morgan Library. Not bad for someone who got a U for penmanship at school.

Alice: A Survey of the Calligraphy of Alice, is the first-ever collection of Koeth’s calligraphy, filled with more than 140 illustrations which track a career that spans over 60 years. With access to Alice’s personal archives, publishers at the Kelly-Winterton Press are able to present a book that shows the evolution of her style through the decades.

Alice has taught the art of drawing, or calligraphy, to generations of scribes, but relatively few of her works have been reproduced. However thanks to a successful campaign over at Kickstarter, devotees can now study for themselves the work of a master calligrapher. With preliminary drawings included alongside finished pieces, this is a rare chance to examine Alice's working process.

Complete with an introduction by typographer and calligrapher Jerry Kelly, plus an eloquent and appreciation from Alice's colleague Donald Jackson that sets her work in context, this book is set to be a valuable addition to any designer's bookshelf.