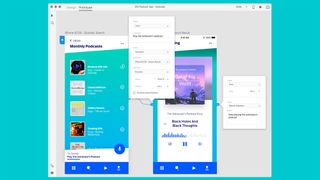 Adobe XD has become the first and only UX/UI platform to enable designers to create prototypes for voice-activated devices. Users can now move seamlessly between voice and screen prototyping thanks to the addition of new voice trigger and speech playback capabilities.

XD (which stands for experience design) is the part of Adobe's Creative Cloud that provides users with an intuitive way to create product prototypes (sign up to Adobe CC here). Voice experiences are becoming more and more popular (the number of smart speaker users in the US is expected to reach 90 million this year), but until now, they have been excluded from the main prototyping tools.

XD offers a way for designers to start creating hi-fidelity prototypes for digital experiences that extend beyond the screen, without having to grapple with the complexities of each platform. That might be adding voice commands to a mobile app design, introducing speech playback to an in-car navigation system, or making the most of the capabilities of Amazon Alexa or Google Assistant.

Voice triggers work in a similar way to taps or clicks in XD prototypes; launching a particular interaction when the user says a specific word or phrase. Speech playback gives designers access to a powerful text-to-speech engine, which will enable them to design for platforms such as voice assistants and smart speakers.

Along with these new capabilities, Adobe XD has added a UI kit for Amazon Alexa’s new frontend framework: the Alexa Presentation Language (APL). This comprehensive kit contains all of the styles, fonts, colours and components required to design for Amazon Alexa.

Other updates to Adobe XD

A number of other exciting XD updates have been announced at Adobe MAX. The first is the addition of third-party plugins, which enable developers to extend the platform in new and exciting ways. As well as giving the community a chance to build their own features to customise XD, Adobe has also been working on integrations with other established apps. Users can already move seamlessly from Photoshop CC or Sketch into XD, but integrations with popular productivity and collaboration apps including Slack and JIRA promise to make the app even more usable. Users can access the first wave of plugins from directly within the XD app, with more on the way.

Another interesting announcement is the introduction of Auto-Animate, which will provide a simple way for designers to create immersive animated transitions between artboards. It promises to be simple to use, but have a big impact on the user experience. At the moment, playback of animations is supported in the preview window and mobile apps only – but Adobe says support for prototypes viewed in the browser is on its way.