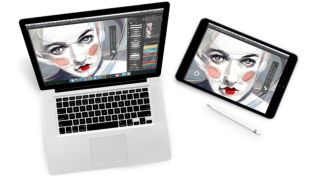 The team behind drawing tablet app Astropad have just unleashed a raft of new features as part of its latest update, which further puts the squeeze on their main competition, the Wacom Cintiq.

Launched earlier this year, Astropad introduced the ability to turn an iPad into a professional graphics tablet, that works in conjunction with a Mac. Unsurprisingly, the ingenious and affordable app has gone down a storm, with users impressed by the software's ease of use and image quality.

Updates to the system play on the app's strengths, including an upgrade to the high-performance Liquid core technology, which now runs three times faster and with massively reduced pixelation that's sure to enhance plenty of illustration projects.

A new Velocity control allows users to analyse network conditions dozens of times per second, which will also help to balance the image quality and latency. These new features won't punish your iPad's battery life, though, thanks to Astropad now using less CPU and four times less memory.

When it comes to drawing with a stylus, Astropad now has a more true-to-life feel which has been hand-tuned by real artists. This is also paired with a sleek new UI and an option to make pesky cursors disappear.

Perhaps best of all, Astropad has cut its price to a bank balance-friendly $29.99, and if you already downloaded it earlier in the year, these updates are on the way to you free of charge.