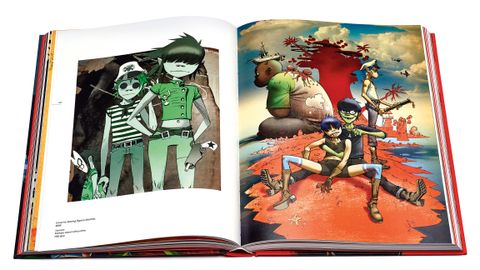 Beautifully presented with a vast array of art, this book is the perfect way to look back on the career of a cult art legend.

Many artists dream of finding huge mainstream success while staying true to themselves and their influences. Comic book artist and designer Jamie Hewlett is one of the few to pull this off more than once, with his crisp, energetic artwork and drawing techniques shaping the look of counterculture for the last quarter of a century.

Thanks to the success of his first major strip, Tank Girl, and his design work for virtual band Gorillaz, Jamie's style has become one of the most recognisable and admired among both fellow artists and the public alike. And while these both get the attention they deserve in this chaotic collection, publisher Taschen also sets aside a respectable number of pages to cover a diverse range of his other projects, some of which didn’t see the light of day.

The result is a collection with a suitably grab bag feel about it. With much of Hewlett's work lost down the back of futons, stolen by editors or given to dealers, we're lucky to have what’s presented here. "The book might be terrible, but it doesn’t matter, it's just a book," jokes French fashion photographer Jean-Baptiste Mondino in the lighthearted introduction. "Life's more important, right?"

This doesn't mean we're left with a substandard look back at the first 25 years of Hewlett’s career. What we get is a book of art that encompasses his versatile talents. Split into 12 sections, this hardback takes a irreverent approach that makes the reader feel at home in Hewlett's anarchic worlds.

Each chapter kicks off with a short overview of the project in question, whether it’s an exhibition of adult cinema-themed posters or pine tree illustrations, before presenting some of its choicest cuts. Readers can trace Hewlett's development as an artist if they want, but don't expect to learn too much about how he works. Instead, it's best to just sit back and let the book take you on a ride.

Topping off the collection is a batch of sketches printed on transparent animation paper and a biography that hammers out the significant dates in Hewlett's career. His work has acted as a gateway drug to other artists for a reason, so give your eyes a treat and check out this retrospective while you wait to see what Jamie does next.

This article was originally published in issue 158 of ImagineFX, the world's best-selling magazine for digital artists. Subscribe to ImagineFX here.

Beautifully presented with a vast array of art, this book is the perfect way to look back on the career of a cult art legend.