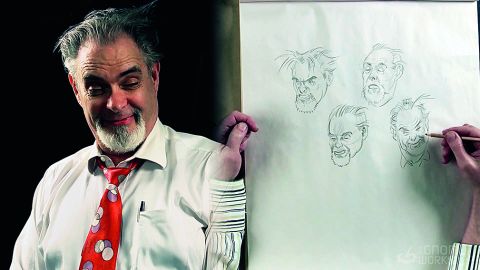 The success of this video ultimately depends on how much viewers are willing to put in, as the participatory nature of this format means it is lacking in dense information.

The fourth in Van Arno’s Figure Fundamentals series (we reviewed Volume 1 on the female body in ImagineFX issue 127) sees the artist focus on the male head, following on from the female head covered in the previous instalment.

On paper, the three-and-a-half-hour running time looks impressive, but closer inspection reveals that the video only offers a mere 15 minutes of theory, where Van shows you how to work out basic proportions and make a head drawing feel more three-dimensional with planes. The artist is clearly reluctant to bog you down with formulas and rules – some of which, he says, are “kind of iffy”.

The rest is as practical as it gets. Van works with a couple of life models, asking them to pose and showing you both the pose and his drawing as he makes it. The idea is that you get out your own drawing pad and sketch along with Van. It’s like attending a group life-drawing session where you get to look over a master artist’s shoulder while you draw, with the added bonus of being able to press the pause and replay buttons.

Model sessions include five-minute sketches from various angles, an entertaining series of expressions in which Van encourages you to stay loose with your line, and a more in-depth exploration of relating head planes to light, rendering both highlights and shadows with coloured paper representing the mid-tone.

The participatory nature of the format means that Figure Fundamentals Volume 4 isn’t as dense with information as some training videos you’ll have watched. Essentially, what you get out of it depends in large part on what you’re prepared to put in. One casualty of this practical emphasis is that you don’t come out with much sense of what makes a male head ‘male’, other than some brief discussion of jawlines and broad proportions.

The success of this video ultimately depends on how much viewers are willing to put in, as the participatory nature of this format means it is lacking in dense information.