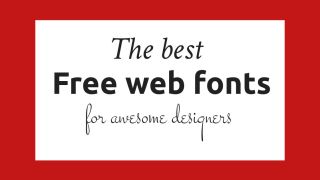 Searching for brilliant free web fonts? We know it's time-consuming to cut through the ocean of fonts online, so we've rounded up the best free web fonts right here to get you started.

Of course, the very best examples aren't usually free. For those, there are various methods you can use to source and license great web fonts, including subscription-based models such as Typekit and Fontspring, which boast libraries of quality typefaces that are becoming increasingly popular with professional designers.

If you're on a tight budget, however, or just looking to experiment on a smaller project, there are plenty of good web fonts available at no cost, if you know where to look. And that's where this list of the best free web fonts comes in.

Below, you'll find a broad selection of web fonts, so there should be something here to suit every project. Want more? Don't forget to check out our comprehensive list of free fonts for designers.

Medium contrast display sans serif Fjalla One has been carefully designed and adjusted to the restrictions of the screen, and despite having display characteristics, it can be successfully used in a wide range of sizes. A beautiful design, it's not hard to see why Fjalla One is featured on more than 410,000 websites.

M+ 1p is a set from the M+ Outline Fonts Project, which has developed a super-family set of free web fonts consisting of four sub families. For M+ 1p, the team created a proportional font with seven weights ranging from thin to black. With its crisp shape and sleek terminals, this letterforms aim to be sophisticated and relaxed at the same time.

Taking its inspiration from old and kitschy hand-cut vinyl letters on acrylic sheets, Do Hyeon is a Latin and Korean split font. In this set, consonants and vowels are visually connected, and the font even selects the right consonant for its adjacent vowel. Pretty clever.

A Unicode-compliant Latin and Devanagari text type family designed for the digital age, Palanquin is a versatile font family that strikes the balance between typographic conventions and visual flair. It consists of seven text weights and can be extended with a heavier display family, Palanquin Dark.

If you'd like to contribute to the Palanquin project you can find it here on GitHub.

Available from The League of Moveable Type, free web font Ostrich Sans is a gorgeous modern sans-serif with a very long neck. The family comes complete with a number of styles and weights, including dash, rounded, ultra light, normal and black.

PT Sans was designed by Alexandra Korolkova, Olga Umpeleva and Vladimir Yefimov and released by ParaType in 2009.

Free web font Fira Sans was created by legendary type designer Erik Spiekermann, with additional contributions from Carrois Type Design. Designed to integrate with the character of the Mozilla FirefoxOS, the Fira family aims to cover the legibility needs for a large range of handsets varying in screen quality and rendering.

Julieta Ulanovsky created this font because she wanted to preserve the beautiful typography she saw on the street signage in Montserrat, Buenos Aires. As the area is developed, the old posters and signs are becoming lost. This font is distributed under an open source license and goes some way toward preserving the urban typography of the historic region.

Abril Fatface is part of a big type family that has 18 styles designed for all kinds of uses. Fatface has a strong, elegant presence that makes for striking headlines. It's commonly paired with Lato, Open Sans and Droid Sans.

With its extra large x-height and short descenders, Playfair Display is particularly suited to headlines, especially if space is tight. It works well with Georgia, and you'll also see it used with Oswald, Lato and Arvo.

Used by many design blogs these days, GT Walsheim is a geometric sans-serif typeface designed by Noël Leu and released in 2010 through Swiss foundry Grilli Type.

You have to pay for the full font family, but Grillit Type kindly offers GT Walsheim as a free trial, so you can try before you buy.

If readability on screens is a priority in your project you might reach for Merriweather, which was designed especially for this purpose. Merriweather is always evolving, and you can request features and stay up to date by checking creator Eben Sorkin's blog.

Josefin Sans was drawn with vintage Swedish design in mind, and has a geometric, elegant aesthetic. The letter z has a distinctive 'haircut', which was inspired by New Universal Typeface Newut from André Baldinger.

Designed by Riccardo De Franceschi, Gravitas One is modelled on the 'UK fat face' – a heavy advertising type created during the industrial revolution in England.

This is a font that'll look great in a medium to large scale; perfect for headers, tabs and striking titles.

Daniel Johnson wanted to create a Roman alphabet using the same kinds of strokes and curves as the Kayah Li glyphs. Jura was born and has been expanded to include glyphs for the Cyrillic and Greek alphabets. It's available in light, book, medium, and demibold weights.

Originally designed by Morris Fuller Benton for the American Type Founders Company in 1903, League Gothic has been given a new lease of life thanks to The League of Moveable Type.

Thanks to a commission from WND.com, the web font has been revised and updated with contributions from Micah Rich, Tyler Finck, and Dannci, who have contributed the extra glyphs.

Fjord is a serif typeface, originally designed with printed books in mind, and particularly intended for long texts in small print sizes. This will look great for your longer content on the web as it features sturdy construction, prominent serifs, low-contrast modulation and long elegant ascenders and descenders relative to the 'x' height.

The Amaranth family is a friendly upright italic design with a slight contrast and distinctive curves. With its three new styles Amaranth works really well with almost any text type. This is a font perfect for playing around with – see what works!

Released under the SIL Open Font License, Victor Gaultney's serif was designed specifically as a multilingual face, incorporating Latin, Cyrillic and Greek scripts and advanced support in the Gentium Plus version. Gentium Basic and Gentium Book Basic are both available as free web fonts, but are restricted to a Latin character set.

Designed by Steve Matteson, type director at Ascender Corp, this humanist sans serif boasts great legibility even at small sizes, and has been optimized for both web and mobile interfaces. This free web font has an upright feel, with open letterforms and a neutral-yet-friendly appearance that ensures versatility.

In the tradition set by the likes of Meta and Tahoma, Anna Giedry's designed Signika with signage and wayfinding in mind, where clarity is key. This free web font is a sans serif with low contrast and a tall x-height, qualities that translate well onto screen. Its wide character set includes small caps, pictograms and arrows.

Drawing on the trend for 1930s-style geometric typefaces with some added Scandinavian flavour, Santiago Orozco's distinctive slab serif brings a distinctive 'typewriter' feel to its sans serif counterpart, and this free web font is perhaps best suited to display use. Unusually, Josefin's x-height is half that of its caps height.

As its name implies, this is a grand Ancient Roman-style serif that is particularly distinctive as a display font used all-caps for headlines, although works stylishly as a sentence-case text face at slightly larger sizes. This free web font's elegant proportions are reminiscent of classical architecture, with semi-circular arches, horizontal cornices, and vertical columns.