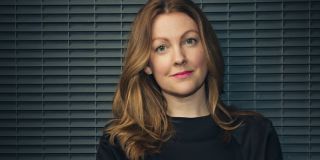 Caroline Pay is at the top of her game. Over the past 20 years she's worked for the biggest agencies in adland, including Mother, BBH and Wieden + Kennedy, and won major awards for her work with brands such as Levis, Coca-Cola, Honda and Dr. Pepper.

Just over a year ago Pay landed the job of joint CCO at Grey, where, along with Vicki Maguire, she runs an agency of over 400 talented creatives. We caught up with her after a packed-out talk at D&AD Festival 2018 to find out how she got to the top spot – and what you should be doing if your work alone isn't earning you the promotions you deserve.

01. Be choosy about where you work

To have a successful career within an agency, you need to be working somewhere that will make the most of your talents. When Pay joined Grey, she was looking for somewhere that would allow her to shine.

"I wanted to thrive," she replies, when we ask her about her aims when she took on the role of joint-CCO. "And for the job I was looking for next, I needed to know that the people I was working with would allow me to do that. That means recognising what I'm good at, and asking for it and encouraging it.”

03. Get excited about meetings

If you slink into meetings late and with no ideas, you're doing yourself no favours. “I get in there early, and put my shit down on the table and am ready to own the meeting," asserts Pay. "Prepare. Prepare to be amazing."

Recognise that this is also your opportunity to sell your ideas and display your talent. "Be really excited to show your work, because that energy will ooze out of you,” she adds. Don't underestimate how far a little enthusiasm can get you in general, either – Pay says when she hires young creatives she looks for 50 per cent talent and 50 per cent energy.

04. Don’t assume you have to work full-time

When Pay had her son, she worked as a part-time freelancer at Wieden + Kennedy, on projects including the Honda Drive Every Drop campaign (above). “I managed to run big accounts and create big bits of work for very, very big clients in three days a week," she says.

After a couple of years she moved to a four-day-a-week permanent contract, but only went back to work full-time when her son started school.

While not being in the office full-time didn't hold back Pay's career one bit, there are some rules to follow. "I genuinely believe you can have it all, so long as you don't try and do it all," she says. She advises being very clear about when you’re available and when you’re not, working with others and not trying to do everything yourself. And don't underestimate the value of having a great team around you that respect you.

When you're not at work, try and switch off from it. Pay describes herself as "a bit like a robot" in that even from her days as a young creative at Mother, she has been able to leave her work behind when she walks out of the door of the office at the end of the day.

"Life is so much more important and inspiring than just sitting and poring over advertising..." she smiles. "Because I give so much when I'm at work, I expect so much out of life in order to fuel me at work."

Grey is an agency behind some incredible campaigns, and following in the footsteps of Nils Leonard was, Pay admits, "intimidating". But she was adamant she didn't want to continue in the same vein, and "definitely wanted to outdo him", and encourage new and different ideas.

“I don’t believe in looking backwards or going back to your best,” she says. "Grey had a fantastic couple of years, but coming up we’ve got more, different, greater moments to come.”

In fact, Pay's whole talk at D&AD Festival was centred around the idea of breaking with tradition and doing unexpected things. "I genuinely believe at this time in our industry we need to break the rules, because we're fucked. We have nothing to lose," she explains.