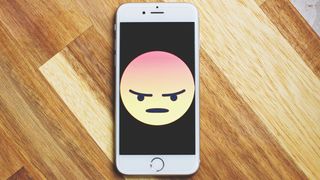 The world of social media is a fickle one. Even if you're lucky/dedicated enough to amass a million followers on Instagram, you'll still need to work hard to keep from losing those followers once you've got them.

To find out the worst social media sins, those ones that have you reaching for the Unfollow button, we asked our readers on Twitter and Facebook what annoys them the most about brands and other creatives on social media.

We also, rather unscientifically, asked around our office to see what gets design journalists' and art editors' backs up online. Here's what you shouldn't do if you want to keep your hard-earned followers...

When they start promoting political views. Stick to what you’re known for, not with what you think you know.October 13, 2018

Various people mentioned this as a big no-no, which is interesting seeing as some big brands, such as Nike, have used politics in their campaigns recently. Nike's decision to use outcast American football player Colin Kaepernick in its campaign with the slogan 'Believe in something, even if it means sacrificing everything' led to admiration from some, and outrage from others (for more on this, take a look at our article on divisive ad campaigns).

The thing is, Nike is big enough that it doesn't matter if a few thousand people decide to burn its trainers or boycott it. But if you're not Nike, steer clear of politics, even if you're pretty sure a lot of your audience agrees with you.

If your account primarily shows your illustrations, then it's fine for you to also show your followers glimpses of your everyday life. In fact, it's a good idea. But if you suddenly go on a five-post rant about your latest car, or decide to share every minute of your day, documenting every meal consumed, for example, then you're playing with fire. This leads nicely to our next point.

There's nothing more annoying than opening an app to find it flooded with posts from one account. We don't want to see all the images of your holiday drip fed to us one at a time over a period of hours. Nor do we want to see images of the same bag from 100 different angles across 10 different posts.

Most of all, you should try not to post just for the sake of it. Post because you have something you want to share with your audience, or else you run the risk of boring people with 'filler' content.

You should also be wary of posting exactly the same thing across platforms, as people may get irritated by seeing the same thing several times. Try and tailor your message for each platform.

Several people also mentioned their pet hate as brands trying to be too 'millennial' or 'cool' by using slang, or overusing the same phrases – one Twitter user, Krissy, gave the example of using 'Fri-yay' every week.

Frankly, we don't know what you kids are talking about, we ❤️ Fri-yays.

Seriously, though, if you wouldn't use a phrase or word in real life, you should avoid it on social media. We also agree with the commenter above who said you should aim for originality and creativity in your posts. Think about it: if you can't be creative on social media, why would someone hire you to be creative elsewhere?

05. Use too many hashtags

We've all #seen this one. #allthetime

Brands that overuse hashtags in their main posts, so you can barely read what they're trying to say are #annoying.

There's also the ones that post about 50 hashtags under the main post, or in the comments. This seems a little needy. #sorrynotsorry