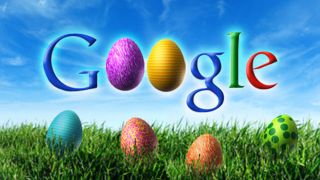 If you haven't yet heard of Google Easter Eggs, you've probably led an extremely productive life up until this point. Well, all of that is about to change, and we promise you won't be sorry about it.

Once upon a time, you may have relied on the word on the street and a secret handshake to feel like an insider, but now you can be the one sharing secret tricks, as we've chosen the best of the Google Easter Eggs and listed them right here.

If you'd like to insert some Easter Eggs in your site, check out our guide to the best web design tools out there right now. Or if you want some advice on user testing, we've got a guide for that too.

What is a Google Easter Egg?

The term 'Easter Egg' has two meanings. Both eggs are hidden, but one is likely to be found in a garden during a frantic hunt whilst the other is buried inside a design – a secret feature that only those 'in the know' will be able to enjoy.

These Easter eggs are often videos or games built into the code of a program or website that can only be unlocked by performing a certain action. So you have to know what to do to be able to take part.

To find Google Easter Eggs, all you need to do is type the search term into the Google search bar then follow our instructions for some Easter Egg fun. Some work slightly differently, but we will keep you updated as we go. But we should warn you, now you know the extent of the content of this deliciously addictive feature, your workflow may suffer as a result.

Do you miss the original manifestation of everyone's favourite hedgehog? We certainly do. Here's your chance to enjoy the 1991 version of our spiky friend, complete with those evocative jumping noises.

Type 'Sonic the Hedgehog video game' into the Google search bar and you'll find Sonic waiting for you to the right of the screen. After a little while, he starts the foot tapping that used to give us all palpitations, letting you know you're taking too long.

Click on Sonic to see him jump, and hear the 'boing' that was the soundtrack to hours on end of hoping the Mega Drive didn't overheat. Keep clicking, and after 25 times, he will transform.

For a trip back in time, try searching 'Google in 1998'. Although it's less feature-packed than other Easter Eggs, it's certainly interesting to check out how Google used to look. You can't actually search on this page, but we enjoy the retro aesthetic and pondering how Google has evolved since then.

Check out the links at the bottom of the page that suggest the user try searching through some of the other big search engines of the time. That's certainly a feature that's unlikely to return.

Sometimes we long for the simplicity of the days when playing PC games was limited to those found in the Windows start menu. Solitaire, Hearts and... that other one with the King's head that turned from side to side.

And of course, Minesweeper. Here's your chance to immerse yourself in the numbered battle against the computer. Type 'Minesweeper' into the search bar to partake.

Google released this super-fun series of Friends Easter Eggs this year, in celebration of the 25th anniversary (yes, really) of our favourite group of chums. And it's really our favourite.

We won't go into all of them, we don't want to ruin the surprise, but try typing in the full names (we know you know them) of the characters and watch what pops up. We've demoed 'Joey Tribbiani', because everyone loves the Joey Special.

There will be no place like your Google homepage after you type 'Wizard of Oz' into the search bar. Click on Dorothy's sparkling Ruby slippers and watch the world turn upside down as the eponymous tornado comes to town.

This one was created earlier this year, for the 80-year anniversary of the film's release in 1939.

This is a Chrome-specific Easter Egg that the dinosaur-mad among us will get a kick out of. If you've ever tried to browse offline on your Chrome browser, you might recall the Lonely Dinosaur illustration that appears before you. But have you ever taken much notice of it?

To start the action, Android/iOS users need to tap on the dinosaur, while desktop users press the space-bar or the up arrow key. This launches the T-Rex Runner game, in which users control the running dinosaur by tapping the screen or pressing the space-bar or up arrow to avoid obstacles. The features of this game are updated periodically, and reaching different point totals changes the entire screen.

It's seriously hard to believe that such an abundance of fun has been right in front of our eyes this whole time and we never knew. What a great reason to get offline.

This one is not a novelty piece of fun but a useful tool that we bet you'll be using regularly from now on. Type in 'colour picker' and a colour picker tool will be displayed on the screen. You click and drag your cursor inside the picker area to highlight a colour on the right. Add Hex, HSL, RGB or CMYK values to find a certain colour, then click and add to your palette to save it.

And you can enter 'rgb to hex' to be provided with a colour picker that is also an instant colour value converter.

Remember that Google Doodle from 2010? It is still around and waiting for you to get involved. Type in 'Pac-Man', 'play Pac-Man' or 'google Pac-Man' and an ear-splitting (honestly, do turn the sound down a bit before you start, we had a cat in the room that almost jumped out of the the window) version of the game will appear on the screen. Use your arrow keys to move him around the screen.

If you've ever found yourself stressed or angry whilst sitting at the screen, you might enjoy this one. We didn't realise Google had our backs here, but if you type in 'Breathing exercise' to the search bar, a (sort-of) calming blue screen appears along with some helpful instructions to complete a breathing exercise. Perhaps not as effective as leaving your computer and going outside for a walk, but certainly enough to tide you over in a non-emergency. Thanks, Google.

It's not just the Google search engine that has delights in store for Easter Egg hunters. Google Maps has loads to explore, too. So hold on to your wizard hats Harry Potter fans, as your minds are about to be blown.

Diagon Alley, the cobblestone alley from the Harry Potter films, has been added to Google Maps. Peek into the windows of Slug & Jigg Apothecary, and Flourish and Blotts bookshop. You will have to put up with other tourists, though, as the images are taken from the Warner Bros Studio Tour location in London.

You can also type in 'Fantastic Beasts, New York City' and drop Pegman onto the map and you'll be transported to MACUSA the Headquarters of the Magical Congress of the USA, the governing body of wizarding in America. You can have a good look around the magical building that features in Fantastic Beasts and Where to Find Them, visit The Blind Pig and more.

There's a bunch more Google Maps action, such as the option to travel by dragon (from Snowdon to Breacon Beacons) or the Loch Ness Monster (from Urquhart Castle to Fort Augustus). But we are obsessed with this Doctor Who-themed Easter Egg.

Type in 'Earls Court Road Police Box' into Google Maps and drag Pegman to the location that appears. Suddenly you're inside the TARDIS – prepare to be captivated by the 360 degree internal view you're treated to. It's, fittingly, actually trickier than it sounds to gain access. You have to aim for slightly to the left of the Police box drop pin, and make sure Pegman's feet are floating to the left too otherwise you'll be rudely dropped onto the boring old road.

(NB: Apparently this Easter Egg doesn't work every time on the new Google Maps interface. If you're having trouble, put yourself into incognito mode and things should improve.)

Talking of Pegman (the little guy you drop into Google Maps to see the streets up close), he loves to be involved in Google Easter Egg surprises. Turns out, he isn't always always dressed in yellow. Some places, and special days, will bring him to life and give him a bit of personality.

Drop him onto Buckingham Palace to see him turn into Peg Ma'am, or try Groom Lake, Nevada or Area 51 to transform him into a UFO, or near to the ocean in Hawaii to see him shape-shift into a mermaid.

11. Hitchhiker's Guide to the Galaxy

There is a whole host of number-based Google Easter Eggs that are calculator-related. And this one, based on the Douglas Adams series, is said to be the very first Easter Egg ever embedded into the system, predating the calculator on which the answer is now revealed.

Type in 'the answer to the ultimate question of life the universe and everything' to see the famous digits appear.

Enter 'do a barrel roll' into the search bar and enjoy the somewhat geeky (but awesome) reference to Nintendo's Star Fox as the screen rotates 360 degrees.

The retro game that kept us awake all night on our Nokia 3310s, is still with us. We can't believe we didn't know. Type 'Snake' into Google and fill your boots. Use the arrow keys to control the little guy, this is possibly slightly easier on the thumbs than the little keyboard of those old Nokias. It is in technicolour, which was a slight disappointment, but it still provides (almost) the same levels of fun.