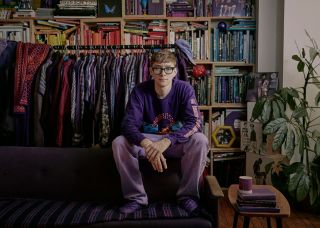 Gary Card is one of the most hotly anticipated speakers at this September's Us by Night event (Image credit: Gary Card)

Us by Night is unique among design and creativity festivals, because it takes place in the evening: a much more civilised time to network, learn and be entertained.

Taking place in Antwerp this 26-28 September, Us by Night is also a great excuse to indulge in the delights of this Flemish city, which is an intoxicating melting pot of creative practices, multicultural artists and innovative tech businesses. Not to mention the arcade, the night market, the delicious local food, and the fluorescent ping-pong!

But of course, the biggest reason to head to Us by Night are the top-flight speakers, and one of the top draws this year will be Gary Card.

Who is Gary Card?

London-based designer, illustrator, artist and sculptor Gary Card is known worldwide for his dreamlike scenes and whimsical designs for the likes of Nike, Hermès and Comme des Garçons, as well as designing album covers for Paul McCartney and costumes for Lady Gaga.

Now, he's about to take over Phillips‘ London Gallery for a major private-sale exhibition, called Hysterical. For this, he's created a colourful, cartoonish wonderland as a backdrop to works by contemporary artists.

We caught up with Gary to find out what makes him tick, what he'll be talking about at Us by Night, and why no one should miss it!

What will your talk at Us by Night be about?

My forthcoming exhibition, Hysterical. It's by far the biggest thing I've ever worked on, getting to re-contextualise some of the work from my art heroes. I want to talk about the whole process and what brought me there.

What's the inspiration behind it?

I've always been interested in the concepts of high art and low art, and the space between them. What makes something high art? Many artists that I admire have explored this division through the use of cartoon imagery.

Illustrators such as Robert Crumb and Basil Wolverton have explored this world for 40 years and are now being reassessed as serious artists worthy of their place in the canon. George Condo, Paul McCarthy, Ugo Rondinone are all artists who've inspired my work, and whom we have chosen to feature in this show. They all draw on inspiration from pop culture to explore ideas of great depth and feeling.

McCarthy for me, in particular, has chosen to scratch beneath the joyful, seemingly harmless exterior of our favourite cartoon icons to reveal subjects that make his work so unsettling. Younger artists like Jordan Wolfson and Jamian Juliano-Vilani are picking up that mantle.

This strange corner or contemporary art has brought me to the world of Hysterical, a cartoon fun house, which extenuates the vibrancy of our curated pieces as well as heightening their inherent menace.

Set design, illustration, toy design, sculpture... you're often described as a polymath. Was that always your intention?

That word 'polymath' is so funny. It's only been batted around the last two or so years. Now everyone's a polymath!

It only applies to me because I couldn't really make my mind up what I wanted to do. So I tried a bit of everything. I studied theatre design, so having a broad range of skills was very useful. You had to be be able to paint, sculpt, make costumes, act and write, sometimes even create sound and compose music. So that training definitely informed my approach to design now.

It certainly helps with budgets! When I started out, I couldn't afford to get anyone to make my stuff, so I just did all myself. As I grew with the job, my teams got bigger, but I still remain as hands-on as I can, although for a lot of the team that means getting under my team's feet.

Where did your love of vivid colour come from?

I think it's just from a love of pop culture in general. Cartoons, MTV, comics and toys: everything I loved was a psychedelic vomit of colour and styles, oversaturated, detailed, intricate and messy. That's still a big part of my personal style, though hopefully it's far more focused these days.

Very early in your career, you became the go-to for some of fashion's biggest names. Was there a "big break" that propelled you to that level?

There wasn't one big break really, just a series of fractures. Probably the biggest leg up was from working with [Italian-Japanese fashion editor] Nicola Formichetti in the mid-noughties.

I messaged him on MySpace and asked if he'd be interested in using any of my work in his editorials. Soon after, I was featured in almost every shoot he worked on, providing head pieces, masks, strange props and sculptures, and finally set-pieces for Japanese Vogue, Dazed and Confused and Another Magazine.

From there, I started making commercial work for his clients like Uniqlo, Comm des Garcons and Lady Gaga. It all happened very organically, I was extremely lucky.

If you could have a conversation with your younger self, what would you advise him?

I could tell him not to stress about everything so much. But then some of that frantic nervous energy made some really great stuff, so that might not be great advice! One thing's for sure: I would tell him firmly, 'Don't get drunk the night before a job, you idiot!' I'll leave 'why' to your imagination.

How do you see your career evolving in future?

I'm so excited about painting now. Painting has always been part of my job – painting backdrops for editorials – but it's always been a means to an end. Now I'm finally painting for myself, as standalone pieces, with no model standing in front of it.

That's genuinely thrilling to me now: it's a dream come true. So in the future, that's where I would like to see my career go,

We're so excited to see you speak at Us by Night in September! Have you been to the event before?

I have not, but my best friend Ferry Gouw spoke there last year and said it was amazing. He came home with loads of stories about how fun it was, so I was very excited when they asked me to be involved!