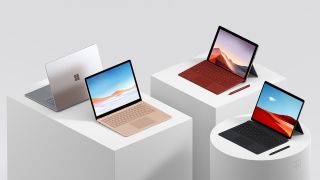 Microsoft recently released its Surface Pro 7 tablet/laptop hybrid – the followup to its successful Surface Pro 6 device. While Microsoft is perhaps best known for being a software company behind the Windows 10 operating system, in recent years it has also been carving out a name for itself when it comes to releasing desirable and stylishly built hardware with its Surface range of devices.

This includes the Surface Pro range of tablets, which can also be used as laptops by attaching the Type Cover (sold separately). The clever Type Cover not only protects the screen of the Surface Pro when closed, but when opened, has a built-in keyboard and trackpad.

There are some big price-cuts on both the Surface Pro 6 and 7 right now – take a look at our guide to the best Microsoft Surface Pro deals for the lowest prices.

The Surface Pro 6 and Surface Pro 7 are excellent choices for creatives as well. This is because they run Windows 10, which means you have access to all your favourite creative programs, such as Photoshop. Both devices also have gorgeous touchscreens that can be used with styluses for quick drawing and note taking when on the go (for alternatives, see our ranking of the best tablets with a stylus).

One of the reasons why it’s so important to compare the Surface Pro 7 to the older Surface Pro 6 is because they are so similar – something that will disappoint anyone who was hoping that the Surface Pro 7 would represent a big leap over its predecessor.

The similarities are immediately apparent with the screens of the two devices. Both are 12.3-inches, with resolutions of 2,736 x 1,824. Basically, both have exactly the same display. This isn’t necessarily a bad thing, as the high resolution (Microsoft calls the screens ‘PixelSense’) offers very impressive image quality, with a pixel density of 267 pixels per inch (PPI). This leads to very sharp and clear images.

The aspect ratio of the screens is the same, slightly odd, 3:2, which is taller than the usual widescreen aspect ratio of 16:9. This gives you a bit more space to work on vertically.

While on the surface (pun intended), the two devices look identical, when it comes to performance it’s a different story, with the Surface Pro 7 offering improved performance, as well as a more varied choice of configurations, so you can buy the Surface Pro 7 that offers the right level of power for your needs and budget,

So, the Surface Pro 6 offers the choice on an 8th generation Intel Core i5-8250U or Intel Core i7-8650U, plus a choice of 8GB or 16GB LPDDR3 RAM. This hardware is more than capable of running Windows 10 and its creative applications.

However, the Surface Pro 7 offers a clear advantage when it comes to performance. It features 10th generation Intel processors: the Intel Core i3-1005G1, Core i5-1035G4 or Core i7-1065G7. The inclusion of a Core i3 variant gives you an option if you don’t need the power of an i5 or i7 processor, and it more affordable.

All 10th generation processors aren’t just more powerful than the 8th generation, but they are more power efficient as well. This means you’re getting better performance and longer battery life as well.

The two devices also feature detachable Type Covers for using as a laptop (sold separately, though you can sometimes find bundles with the Type Cover included for a reduced price) and both work with the Surface Pen stylus.

When it comes to ports, they offer largely the same selection, with a full-size USB-A port (for plugging in older peripherals), a 3.5mm audio port and microSD card reader. This is a welcome addition for photographers, as it allows you to plug in memory cards without needing an adapter. Both offer Bluetooth wireless connectivity as well.

Where they differ is that the Surface Pro 6 has a mini DisplayPort. Meanwhile, the Surface Pro 7 lacks that, but instead offers a USB-C 3.1 port. This allows you to connect modern peripherals and offers much faster data transfer speeds. If we had to choose, we’d pick the USB-C over the Mini DisplayPort every time.

So, we’d take Microsoft’s comparisons with a pinch of salt. In our own tests, the Surface Pro 6 scored 8 hours and 45 minutes running a looped 1080p video. Meanwhile, the PC Mark 8 battery life test, which replicates day-to-day usage such as video calling, lasted just 4 hours.

Both the Surface Pro 6 and Surface Pro 7 come in a variety of configurations, which means you can choose the hardware you want to match your needs – and budget. So, if you’re on a budget, you can tweak either Surface to come with less powerful processors, or less storage space, to keep the price down.

Meanwhile, the Surface Pro 7 launched with a lower base configuration price of £799. That means it’s actually better value for money, and if you want the extra power, then paying a bit more for the newer device is worthwhile. While you might not expect to see many offers on such a new device, we're seeing some strong Black Friday 2019 deals on the Surface Pro 7.

If paying the absolute lowest price possible is key, then the Surface Pro 6 is the one to get, but the Surface Pro 7’s lower launch price means it’s very good value as well. It’s also worth noting that neither the Pro 6 or Pro 7 comes with the Type Cover or Surface Pen, which means they are an additional £149 and £99 respectively, so you’ll need to factor those in to the overall cost.

Take a look at the best prices in your region right now in the widgets below – or scroll down for our overall verdict.