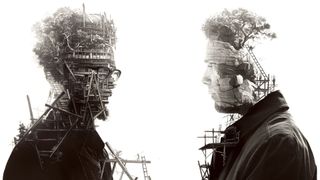 Houston, Texas, was a city obsessed with three things: sports, money and guns. Greg Ruth tried to fit in. As a boy, he'd go to football games. He liked to critique the "outfits" and would ask fellow attendees which team they thought had the coolest team badge, or the neatest helmet design. They answered him with blank stares.

Watching other people play games was "epically dull", so his mind would wander. He thought about nuclear war, laser blasters and falling in love with women from outer space. Back at home, a shag carpet became a furry space beast on which GI Joe figures acted out sprawling melodramas. He read Raymond Chandler, Ray Bradbury, the Dune series by Frank Herbert and pulp novels, and he liked big band music.

He watched B-movies and Star Trek reruns, and Abbott and Costello marathons. He spent much of his childhood withdrawing into an imagined world – a skill that he'd use in adulthood to build a career as an artist.

"I hid from Texas," he says. "I didn't belong in the nest into which I was hatched. So art became the other world into which I could flee to safety, until I was able to actually flee."

Ruth fled to Brooklyn and attended the Pratt Institute, an art and design school, where he tried architecture and fine art, before finally establishing himself as a comic book artist.

He now lives in Massachusetts, and recently created a comic with Ethan Hawke, but previous to this, a music video with Prince and a picture book with Barack Obama. Ruth works on film art and book covers, and wrote his own New York Times bestselling graphic novel. He also created a new, weekly, self-initiated illustration, which became The 52 Weeks Project.

Ruth's busy. Working across so many different disciplines can pose problems. He once drew two comics simultaneously for Dark Horse, both 22 pages, the final issue of Freaks of the Heartland and the first issue of Conan: Born on the Battlefield. The workload alone was tough, but tougher still was the clash of genres.

With Freaks, Ruth knew the story inside out – what he describes as a classic small-town gothic-horror story. He'd established a colour palette, a narrative rhythm. Conan, on the other hand, was a pulpy adventure book, garish and raucous in every way.

For the first issue of Conan, he tried a Freaks-style approach. It didn't work: "Sometimes when you're making breakfast and dinner at the same time, you end up with pot-roast omelettes and fresh jam on your asparagus. It ain't so great. Nowadays, I have a better grasp of my own limitations."

Ruth didn't find his groove until well into the second issue of Conan. So now, when working on a big job, he focuses on it entirely until the project begins "cruising on its own". He may take a book cover or some editorial work – particularly if one project complements the other in some way – but mostly he tries "not to cross the streams".

He also likes to create a soundtrack for big graphic novels. This way, he can listen to music to help him get into the mood, tone and themes of the narrative. It's helpful if he does have to take a break to work on something else. "When I pop the soundtrack on, coming into work, I get right into the world of it." Some gigs, however, are just too good to turn down…

"Why would any human-shaped person say no to Prince?" Ruth says. He helped create a video for the legendary musician in 2004 – one of his favourite ever jobs. He created the dark, moody world in which Prince and his band perform. When the money men got twitchy about some of the video's themes, Prince stepped in and funded the project with his own money.

"Prince pretty much left us to go nuts on that," Ruth says, "and was our biggest cheerleader and defender."

Not every client is like Prince. He made another music video for American singer-songwriter Rob Thomas, which was "much more of a corporate affair". His work in films – where some actors have the power to veto the posters he creates – can be equally restrictive.

"The movie industry," Ruth says, "likes to repeat what's proven to work, even if it's simply chasing diminishing returns or risking derivativeness."

Greg recently accepted a job to design the poster for Ethan Hawke's 2018 film Blaze. "Ethan let me go crazy as I can," he says. They have a good working relationship. His current project is Meadowlark, his second graphic novel with the actor-director. While on a book tour for the first, Indeh, the pair tossed around ideas for scenes, images and characters, which grew into what's set to be an "epic crime melodrama".

Indeh worked the other way round. Ethan initially pictured it as a film, so the final story came from a 300-page script. "More an act of pruning than growing," Ruth says.

"I kind of love the differences between the assignments. There's something really invigorating about tackling new ways of thinking and seeing, and it all dovetails nicely into my overall work ethic of always seeking to tackle projects that scare the shit out of me."

Ruth wakes up at 5am and works until around 6pm, breaking in between to take his kids to school and bring them home again. There's the odd all-nighter here and there. But sticking to this routine helps Ruth with his huge workload. "Inspiration or The Muse," he says, "comes more often if it knows where to find you."

Being so prolific has a practical purpose, too. Ruth aims to be recession-proof. If picture books are going through a slump, he has film work. If the movie work dries up then there are book covers. Having different sources of income also means that he's able to work on the graphic novels he really wants to work on.

Ruth is currently developing a picture book, a script, more book covers, more movie posters, another graphic novel of his own, another 52 Weeks series… he's as busy as ever! But Ruth doesn't like to overthink what it is that he's trying to achieve. Instead, he tries to remember who he's making art for in the first place.

"I honestly try to avoid over-analysing my work. I think this comes from being at Pratt and having that Clement Greenbergian, modernist bullshit crammed down my throat.

"The audience is, in many ways, everything. Not so much to serve their assumed desires, rather to try and force me into an outside perspective, so that whatever I'm doing lands and reads. You have to be both the fan and the creator."

This article was originally published in issue 153 of ImagineFX, the world's best-selling magazine for digital artists – packed with workshops and interviews with fantasy and sci-fi artists, plus must-have kit reviews. Buy issue 153 here or subscribe to ImagineFX here.