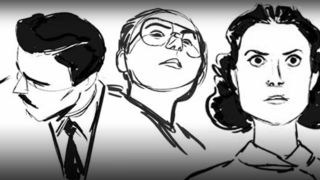 Learning how to draw a head is no easy feat. But as a story artist – or any aspiring artist – you should be able to draw characters from any angle, so mastering this skill is vital.

While there are an almost infinite number of angles to choose from, there are some that come up regularly in the visual storytelling process. This short lesson will cover what these angles are, and break down how to draw a head from those angles – so grab your best pencils and follow along.

The head is an incredibly complex structure. I’m not smart enough to process all that complexity at the same time, so I try to break it down into a couple simple shapes, which, for heads, is (1) a sphere for the cranium, and (2) a pyramid for the nose.

Using these two basic shapes, you can set up the foundation for a drawing of a head at any angle. You can learn all this and more from a number of brilliant lessons over on Schoolism.com.

How to draw a head: 8 common angles

The angles you’ll encounter the most as a story artist are:

You will find yourself returning to these angles over and over again, so it’s good to know them well enough that you can whip them out with your eyes closed. Any angle that’s not covered here can be interpolated with some in-betweening.

Commit these eight angles to memory, and start breaking down the head into simple shapes. That’s the best way to understand a complex object, issue, or problem: break it down into smaller digestible pieces. To draw something is to know it.

When drawing a head from profile, start by arranging your two basic shapes so that they roughly resemble the angle you’re looking for. Once you have a good approximation of the relationships between the shapes, you can start building the rest of your drawing from that foundation. As you will see from this example and those following, the sphere and pyramid arrangement can really help hold your drawings together.

The straight-on is probably the angle we’re most familiar with, as it is the angle at which we see and interact with most people in real life. Still, breaking it down into the basic shapes of a sphere and pyramid will help you maintain the proper proportions and relationships throughout the face.

This is a difficult angle to visualise because we rarely see people from this vantage point. In fact, this was the angle I had the most trouble with when I was a young artist. However, breaking the head down into these two simple shapes will make this angle less intimidating. If you find it difficult to rotate the shapes in your head, try gluing a ball and a four-sided die together, and see how the shapes change when you turn them.

This is a very common angle, as many heroic shots are framed from this vantage point. You’ll find it a lot in comic books, paintings, and print advertisements. Depending on what kind of stories you are telling, this might be an angle worth dedicating your time to in order to master early.

This angle is not as common, but it can be very useful nonetheless in certain storytelling sequences. The key to draw a head from the down angle is orienting the head correctly by first establishing the correct position for the nose. This will give you a great “stake in the ground” from which to build the rest of your drawing.

This is perhaps the most popular angle of all in film, portraiture, and illustration. It’s often the most flattering of the angles as it shows the most dimension in a person’s face. This, along with the up three-quarters (hero) angle, is worth learning first.

Like the down angle, this vantage is less often used, but still very handy to know. It’s an in-between of the profile and the down angles. Again, being able to accurately locate the nose from this complicated angle makes all the difference when you proceed to fill in the rest of the face.

While the up angle was the hardest for me when I was younger, the rear three-quarters angle is the hardest for me now. Every time I try it, it never looks quite right. Thankfully, however, when this angle occurs, the person is usually not the focus of the image but is rather more of a compositional element. Nevertheless, it’s incredibly useful to be able to draw the head from this angle as many “over the shoulder shots” depict the head from this view.