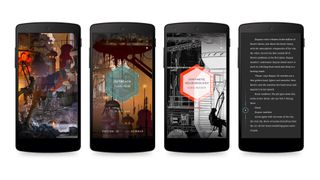 Digital innovation was alive and well at this year’s Design Indaba, which brings the world’s foremost thinkers and doers together for three eclectic, inspiring days in Cape Town each year.

From this year’s festival, we’ve already explored the social impact of design, with five ways design can change the world – as well as Kate Moross’ killer advice for creative success.

Our final story from Design Indaba 2017 celebrates digital innovation, bringing together the advice and experience of three fascinating speakers from companies that have famously ripped up the rule book and disrupted their respective sectors: Google, Duolingo and Airbnb.

So here are three app-based innovations that have broken the rules, for all the right reasons…

For Tea Uglow, creative director of Google's Creative Lab in Sydney, design is about blurring boundaries – and she began her mind-expanding Design Indaba talk with a very personal representation of that, as she’s transgender.

She discussed various creative innovations – including Ghosts, Toast & The Things Unsaid, a VR theatre experience that was filmed in 360 degrees. “Context changes content,” she declared. “Reality is highly fallible.”

But perhaps the most revolutionary digital experiment to have come out of Uglow’s Lab is Editions at Play, which totally reimagines how ebooks present content, and has a suitably dynamic identity created by Universal Everything.

“Why, when ebooks aren’t bound down the side, do we treat them like they are?” she shrugged. “We are the first generation that understands what’s possible when we step outside information, and see it as a spectrum we can play with.”

In partnership with Visual Editions, Editions at Play launched last year with two ‘unprintable’ titles that enabled readers to interact with the text in a whole host of dynamic ways.

Entrances & Exits, by Reif Larsen, was set inside Google Street View; while The Truth About Cats & Dogs is “a book that takes sides”, by rival authors Joe Dunthorne and Sam Riviere. Two more followed later in 2016, and a new release, entitled Seed, is due out next month.

Duolingo changes how language is taught

Luis von Ahn kicked off his Design Indaba talk with a picture of one of those reCAPTCHA security boxes that ask you to type in the distorted words, and asked: “Who gets annoyed when they have to do this?”

In response to the show of hands, he chuckled: “I invented that.”

One app-based innovation that may not be public knowledge, however, is that reCAPTCHA entries are not entirely random: by collecting and cross-referencing millions of responses, they are actually contributing to the digitisation of old, hard-to-scan books.

Duolingo, however, has arguably been von Ahn’s most groundbreaking digital innovation – offering a wonderfully simple, demonstrably effective way of learning a new language.

“It’s like playing a game,” he explains. A language is split into multiple units, and the next one is only unlocked when you complete the previous one. Most cleverly of all, the app learns your own personal strengths and weaknesses, tailoring subsequent questions accordingly.

According to von Ahn, more people use Duolingo to learn a foreign language in the States that in the entire US public school system, a staggering statistic that demonstrates just how effective a game-changing app can be.

Fittingly for the occasion in Cape Town, von Ahn also revealed at Design Indaba that in 2017, Swahili and Zulu would be the first two African languages added to Duolingo.

Airbnb takes on the refugee crisis

In just nine years, Airbnb has turned the hotel industry on its head. Speaking at Design Indaba, Joe Gebbia discussed how a shortage of hotel rooms during a design conference prompted him and co-founder Brian Chesky to rent out an airbed in their flat: AirBed & Breakfast was born.

A theme running throughout his talk was the seemingly endless uses of duct tape to patch up everything from car bumpers to space suits, and how this ‘patch it up’ philosophy could become a metaphor for entrepreneurialism.

As his college tutor once told him: “Whenever you see duct tape in the world, that’s a design opportunity. Ask: what can we bring to the world, and where is it most useful? The area in the middle is duct tape gold.”

The company’s biggest innovation in 2017 is a bold, ambitious goal to use the power of its fast-expanding platform to help address the global refugee crisis.

Airbnb’s #weaccept campaign aims to provide free short-term housing for 100,000 refugees, facilitated through its global network. Yet another example of digital innovation making a tangible impact in the real world.