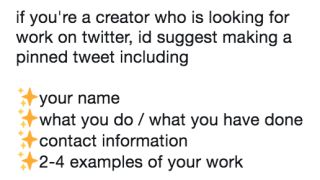 Knowing how to use social media is a skill in itself. For some, Twitter is a place to call out brands that have let them down, cut jokes or debate about the latest news. But used professionally, the social media platform can be a highly efficient way to land new work.

One creative who's done exactly that is oil painter, writer and lecturer Cat Graffam. Earlier this week, she revealed that she's secured multiple gigs through Twitter – and all it took was a snappy, informative tweet pinned to the top of her profile. See her tips for creating a social media calling card below.

if you're a creator who is looking for work on twitter, id suggest making a pinned tweet including✨your name✨what you do / what you have done✨contact information ✨2-4 examples of your workI have gotten multiple gigs from a single pinned tweet. JUST SAYINGMarch 14, 2018

Since Graffam posted this tweet it's blown up, garnering thousands of likes and retweets from grateful creators. However she's keen to point out that she's not the first person to harness Twitter this way.

"When I reformatted my current pinned twin to essentially mimic a mini-resume, it was not an original idea," she says. "Creators having been using similar formats on Twitter, because they know that it is the first thing people, including potential employers or clients, will see. My formatting strived to strike a balance between professional, and quirky, because that is my personality and work."

Despite this, Graffam's tweet seems to have hit a nerve. "The reaction to the pinned tweet was immediate, gaining a couple hundred retweets within the first 24 hours. It broadcasted not only what my portfolio looks like, but the fact that I do many things beyond just painting. It also made contacting me extremely accessible, allowing my bio to be freed up and less cluttered with an overload of links."

"In the next couple days after I put out my current pinned tweet, two clients reached out to me and commissioned me two well-paying paintings and a few people purchased prints from my website."

One of the most surprising and fruitful responses came from the program director of the art and design department at Lasell College in Boston.

"In the hours after I tweeted my work, he reached out to me to hire me for an adjunct professor position, which is what I am currently doing," says Graffam. "It happened to be perfect timing during the hiring process, and he'd been previously following me, but it signalled to him that I've taught before and was looking for work."

"I'm honestly really surprised so many folks responded so positively to my advice about making a pinned tweet. I expected maybe a few people to retweet it – not a few thousand."