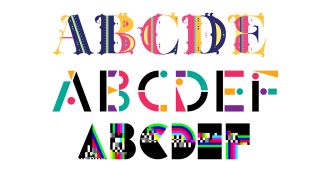 Adobe has teamed up with Fontself to release a diverse range of specially designed colour fonts that show off the full potential of its OpenType-SVG format – and you can download them for free.

Capable of being used in Adobe's design programs including Illustrator or on a website just like ordinary fonts, colour fonts come with colour information built in as standard, to change the way people interact with type.

Adobe's collaboration with Fontself shows the creative community what can be achieved with colour fonts, with the fonts available to download for free this week.

Inspired by geometry, nature, textiles and architecture, the offerings were created by five global artists from countries including Germany, Argentina, Denmark and the US. Watch their evolution in the video below.

As well as being able to download stunning free fonts, by following #ColourFontWeek on Twitter you'll be able to pick up tips and tricks on how to use colour fonts.

Tips so far include how to create your very own colour fonts with Fontself Maker. This extension lets users create fonts in both Illustrator CC and Photoshop CC.

If you're after some vibrant and original free fonts (who isn't?) you've got until Sunday 5 November to head over to the Fontself download page.

They're inspiring examples of what can be achieved with colour fonts, plus you can use the fonts for both personal and commercial projects.

Released day by day, be sure to bookmark the download page and check back over the next couple of days to snap up the full set.

Learn about #ColorFontWeek, the 'color font revolution' that we're happy to have collaborated w/ @Fontself for you: https://t.co/P7N617ts0h pic.twitter.com/4F8Qtl3Y5p31 October 2017