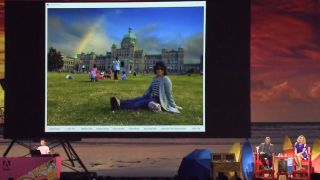 It's a big day designers as Adobe has unveiled the next generation of updates at its creativity conference MAX 2017. Spearheading the new Creative Cloud feature updates announced today is Adobe Sensei, Adobe's artificial intelligence and machine learning platform.

By embedding Adobe Sensei across the entire system of Creative Cloud applications, creatives will be able to go from concept to completion faster than before and effectively design at the speed of thought.

On top of these applications, Adobe has also unveiled updates to existing products such as Photoshop CC, InDesign CC, Illustrator CC, and Premiere Pro CC. Meanwhile, the Adobe Stock service continues to be expanded.

“Adobe continues to lead the creative revolution, driving modernisation and innovation that will accelerate the creative process across all platforms and devices,” said Bryan Lamkin, executive vice president and general manager, Digital Media at Adobe.

“Today, we unveiled a new generation of Creative Cloud, with a wide spectrum of capabilities—from new experience design, 2D animation and 3D rendering apps to an all-new, cloud-based photography service. These tools enable creative professionals and enthusiasts to express themselves and reach their full creative potential anytime, anywhere, on any device.”

Adobe is bringing its decades of creative knowledge to the table with the launch of Adobe Sensei. The machine learning platform is capable of harnessing trillions of content and data assets, including high-resolution images and customer clicks. This enables Adobe Sensei to image match from across millions of assets and understand the meaning of documents.

For users of Adobe tools and platforms, this means that Adobe Sensei is capable of anticipating their next move. By understanding the images that creatives are working with, Adobe Sensei can recreate elements in photos where they don't exist thanks to context provided by nearby pixels.

Photos can be tagged with searchable keywords that mean users can use Adobe Sensei to quickly and easily sift through albums containing thousands of images.  And thanks to being able to recognise facial landmarks such as eyebrows and lips, expressions can be changed in just a single click.

Marketers will also be able to benefit from Adobe Sensei as it can handle huge amounts of data and analyse the numbers you've given it to process. This could help marketers identify a new audience they should target and highlight any changes that are emerging in their market.

Adobe Sensei also helps with the legwork of targeting a new audience by creating specific messages that will resonate with potential customers.

Alongside the launch of Adobe Sensei, a batch of new creative Adobe applications round off the MAX announcement.

First up is Adobe XD CC, a tool that caters to the needs of designers working on prototyping mobile apps and websites. This all-in-one cross-platform solution has been developed in partnership with the design community through a public beta to deliver the speed, precision and quality designers need to go from static comps or wireframes to fully interactive prototypes in minutes.

Thanks to the ability to switch easily from design to prototype more inside the app itself, creatives can work without interrupting their ideas. Interactions and transitions can be dropped in whenever you want, plus everything can be shared with teammates and stakeholders to test the look and feel of a design.

By giving designers the freedom to draw, reuse, and remix vector and raster artwork to create wireframes, screen layouts, interactive prototypes, and production-ready assets all in the same app, Adobe XD CC gets rid of the speedbumps that currently trouble UX designers.

Meanwhile, Adobe Dimension CC gives designers the power and flexibility of 3D with the ease and simplicity of working with 2D. Thanks to a range of texture tools and assets, graphic designers are able to quickly create and iterate on photorealistic 3D images to create branding and packaging in real world settings. This is sure to make the lives of product designers easier as it allows them to whip up concepts faster than before.

Topping off the new applications Adobe Character Animator CC. Having previously been in beta, today's launch of the 2D animation tool helps bring still image artwork from Photoshop or Illustrator to life.

The tool has already been showcased by the likes of Homer Simpson during primetime entertainment slots, but now it's available for everyone to enjoy.

With new features including pose-to-pose blending, new physics behaviours and visual puppet controls, Character Animator CC allows designers to animate their art by acting out movements through a webcam. Voices can also be recorded and lip synced with a microphone. And thanks to Adobe Sensei, facial expressions and motions can be tracked in real time.

Along with Adobe's photography service, Lightroom CC, there are also updates and enhancements to their flagship applications.

These Creative Cloud updates are now available to desktop software. Head over to Adobe's Creative Cloud price page to choose a plan that's right for you.