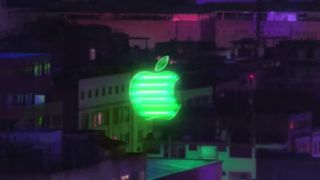 Apple has released a new ad for its AirPods Pro, featuring a young dancer's commute magically transitioning from day to night. Overwhelmed by the bustle of a busy street, she enables the earphones' activate noise cancellation mode, suddenly transforming it into an empty, neon-lit version of the same street at night.

She then switches between both modes throughout her journey, showing off some pretty impressive moves in the 'night' version of scene (the ad stars dancer Matilda Sakamoto). Soundtracking the ad is a new track called The Difference by Australian artist Flume, featuring Toro y Moi.

It all looks pretty slick, and is getting us in the mood for more AirPods news, which we hope will be coming soon in the form of an AirPods 3 announcement. It's also reminding us that sometimes you need a proper soundtrack and some movement to bring an advert to life, a film can sometimes work better than even the best print ads.

The ad is called Snap, and was directed Kim Gehrig, who's created ads such as Viva la Vulva for Libresse and a #MeToo inspired ad for Gillette. The whole film was shot the both in the daytime and at nighttime, to allow for the seamless transition between the two, distinct worlds.

Will it convince us to buy some AirPods Pro? Well, despite the noise cancelling kind of scaring us – isn't it a good thing to be able to hear when traffic is coming towards you? – we'll admit that we are tempted by the design and features of Apple's latest headphones. We were even excited when they first came out.

And if buying these new AirPods Pro means we'll magically get the same dance moves as Sakamoto, we're definitely in.

Check out all today's best deals on all types of AirPods below, or see our dedicated AirPods deals post for more offers.