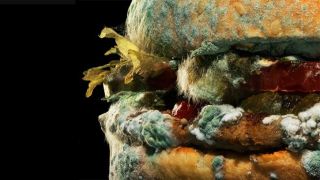 The rivalry between McDonald's and Burger King has played out across billboards and online for years, with the competing chains taking countless swipes at one another – all in the name of healthy (ahem) competition. But this week, a new fighter unexpectedly entered the ring: Nando's.

The beef began last week, when Burger King launched a mouldy new ad (below) showing exactly what happens when its famous Whopper is left to age for a month. Spoiler alert: it isn't pretty (and yet, weirdly, sort of is).

The mouldy burger is shown with the tagline, 'The beauty of no artificial preservatives'. It's an up-yours to McDonald's, referencing the common rumour that their burgers never decompose. We admire the boldness of the ad – it takes serious photography skills to turn a decomposing burger into a thing of such strange, grotesque beauty. We kind of love it.

The ad has led to strong reactions online. They seem to fall into two distinct categories: those who are repulsed, and those who love the dig at McDonald's. This brings up our main criticism of the ad – it's potentially too much of an in-joke. Without knowing exactly what Burger King is poking fun at (everlasting Big Macs), all we're looking at is a mouldy burger – which isn't making us hungry.

Enter Nando's. While Burger King was no doubt awaiting the next move from McDonald's, the chicken restaurant swooped in with an unexpected response of its own:

If you ask us, it's a bit of a cheap move from Nando's. The joke is simple enough (the Nando's burger hasn't had time to rot because it's been eaten, hence the crumbs), but without the impressive photography of Burger King's effort, this packs less of a punch. And worst of all, it's yet another burger-based in-joke. If you haven't seen Burger King's ad, the Nando's post makes little sense. Somebody needs to break it to the fast food chains that people might not be following the burger wars as closely as they think. Thanks goodness we're here to give you the highlights.

We do enjoy a bit of banter between brands – it can lead to some of their most talked-about creative work, as is the case with the mouldy Whopper. IKEA is particularly good at the sport, as demonstrated by last year's hilarious swipe at Apple's cheese grater-resembling the Mac Pro. Check out some of our favourite times brands had a dig at competitors – and won.