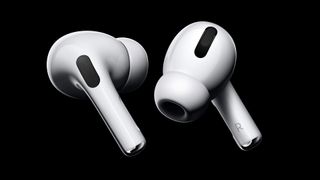 Apple has just announced a top-end addition to its AirPods range, and we've got mixed feelings about them. See, we've always been a little bemused by the runaway global success of AirPods. They might be top of your list when you're looking for Apple Black Friday deals, but we haven't previously been so keen.

Everything about them seems awful: the hard plastic case, the stupid arms that dangle out of your ears, the need to charge them after a few hours of playback, the fact that you can only get them in white because that's the way Apple's done things since the original iPod.

We're deeply suspicious of their sound quality; partly because they don't have snug-fitting silicone ear tips, and partly because every single pair of Apple earphones that we've had bundled with our assorted iDevices over the years have sounded terrible. We've long given up even trying them out; they go straight into a drawer, unlikely to ever be seen again.

And yet these new AirPods Pro (the name's annoying the hell out of us but we'll come back to that in a bit) have, quite unexpectedly, piqued our curiosity, because they appear to have addressed our every prejudice against Apple earphones. The headline feature is active noise cancelling, using the AirPods' external microphones to detect noise and then generating equal anti-noise to cancel it out.

The AirPods Pro feature an Apple H1 chip with 10 audio cores, enabling them to do a lot of sophisticated realtime audio processing such as this. There's also a transparency mode – the complete opposite of noise cancelling – that enables you to hear what's happening in the outside world as well as whatever you're listening to, plus an adaptive EQ that, says Apple, automatically tunes low and mid frequencies to the shape of your ear.

Apple's going big on audio quality here – it mentions a high dynamic range amplifier driving a high-excursion, low-distortion speaker – and while the announcement's a little light on actual audio data, the promise that the driver can deliver bass down to 20Hz definitely sounds good to us.

And crucially, the AirPods Pro feature actual silicone ear tips rather than expecting you to jam a piece of hard plastic into your ear. This has always been a deal-breaker for us; silicone tips mean a better fit and great seal to help shut out unwanted noise, and they also mean that your expensive wireless earphones are a lot less likely to fall out.

We're also pleased to see that the Pro arms look shorter (and a little chunkier) than the ones on the standard AirPods, making them a little less ostentatious than the cheaper models. Now, we know full well that AirPods have become a definite look – leading to the hilarious emergence of fake AirPods as fashion accessory – but we'd feel a lot more comfortable with these less attention-seeking protuberances.

The amount of time you're going to spend charging them is still a little greater than we'd like in an ideal world. Thanks to all the dynamic sound processing going on, you only get four-and-a-half hours listening time off a single charge, rather than five hours with the standard AirPods.

Apple points out, however, that if you disable the active noise cancelling and transparency more you'll get the full five, and it also claims that five minutes in the charging case will get you about an hour of listening time. We'd also like to point out that in their charging case, the AirPods Pro look like adorable little baby robot dinosaur aliens snuggled up in their nest.

Unlike the normal models, the AirPods Pro actually come with the wireless charging case as standard, which makes the asking price look a lot less horrifying. At $249/£249, it's only 50 units of your preferred currency more than what you'd pay if you wanted standard AirPods with a charging case. And while it still seems a bit steep, it's only a quarter of a Pro Stand.

We're definitely keen; in fact, the only thing we really hate about them (apart from the fact that you can only get them in white, but hey, that's Apple) is the name. AirPods Pro looks and feels plain wrong.

We realise that it's grammatically correct, but no. You wouldn't say MacBooks Pro or iPads Pro, so why AirPods Pro? And yes, we get that AirPod Pros looks equally wrong written down, but it feels a lot nicer to say.

We feel that Apple's painted itself into a bit of a linguistic corner here; we're tempted to head to the local Apple Store when they go on sale tomorrow, just to see the sales staff twitch when they're forced to say 'AirPods Pro' over and over again. If you need to know more, head to Apple's AirPods Pro page.