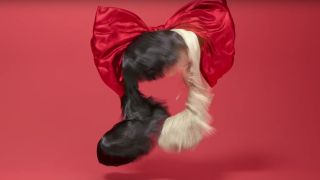 Apple Music has launched a clever new visual identity based around a musical note logo. A 30-second advert entitled Anthem was released today, and kicks off the campaign in style.

The video sees individual artists from the music streaming service's extensive catalogue being represented as a stylised musical notes, set to a banging backing track.

Each musical note style flashes up on the screen for a split second, making for a fun game of 'name that artist' – there's everyone from Lorde and Drake to Sam Smith, Eminem and Fleetwood Mac in there, if you're quick enough to catch them.

The playful ad is also an impressive showcase of different design disciplines, including a whole range of techniques and approaches to match each artist, genre or playlist on show.

There's illustration, VFX and live action footage, and a whole lot of stellar 3D work (one render looks like it's been made from rainbow plasticine; a bouncy ball note holds for a second and then collapses to the ground). The diverse imagery is tied together with the note motif.

Some scenes reference an artist's personal brand – a hirsute pair of quavers flicks its two-tone fringe as an unmistakable Sia; patent thigh-high boots poke through a cutout note as a tribute to St. Vincent.

Others integrate the note into existing music videos from past and present chart-toppers: a bubbly note hovers behind Demi Lovato in a clip from Sorry not Sorry; a lit-up note flickers in the background of FKA Twigs' Two Weeks video.

Also included are more abstract references to Apple Music's curated playlists, for those who want to discover new artists within their preferred genre.

It's a smart way of reflecting the diverse range of different artists and musical styles on offer. The Apple Music service – a rival to Spotify – launched two years ago, and enables customers to stream music or video from an extensive library for a monthly fee.