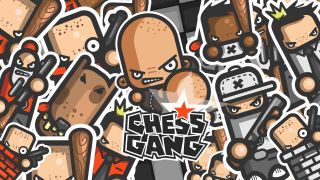 Chess is an already-beautiful game that can take any amount of customisation; search for custom chess sets online and you'll find a wealth of weird and wonderful designs, from ornate fantasy and sci-fi inspired sets through to gloriously minimal objets d'art.

The latest look for chess comes in the form of a mobile game: Chess Gang is developed by Polish studio, Evil Empire, and it's based around street gang culture.

So instead of trying to outwit your opponent and capture their king, in Chess Gang your aim is to be the smartest and strongest on the street in order to defeat your opponent's kingpin and steal their cash. Like any good video game, it even has special moves, like promoting your pawns or castling to enforce your dominance.

That's right – it's chess. You don't mess with the rules of chess. What we love about Chess Gang, though, is its powerful visuals, with all the pieces reimagined as gang members and rendered in cartoon sticker form.

They – and the rest of the game's street-art inspired visuals – are the work of Doncaster-based graphic designer and illustrator Konrad Kirpluk, and they're a joy to behold. You get baseball-wielding pawns, pit bulls as knights, gun-toting bishops, rooks and queens, and kings clutching bags overflowing with readies; cartoon fun rather than gritty street violence.

Konrad created his striking chess pieces in Adobe Illustrator, and as an added bonus he's made a second set of characters that'll be coming to Chess Gang in a future update, in which instead of rival gangs you'll be able to play as cops versus yardies.

You can see the full set of Konrad's designs over on Behance; Chess Gang is available now on iOS and Android for a very reasonable 99p.