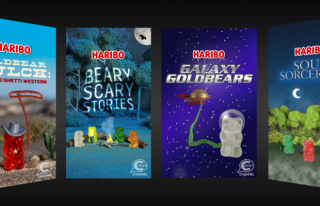 Instagram is a popular place for artists and designers to share their work and build a following. But it's also a platform where brands can engage audiences in creative ways. Just take the Chewy Channel, a new entertainment network from Haribo where its popular gummy bears are the stars.

Proving that there are more ways to get noticed on the social media site than just playing around with personalised Instagram fonts, the Chewy Channel is the first-of-its-kind gummi-themed entertainment network. And it's made specially for Instagram's streaming platform, IGTV.

Created in collaboration between Haribo and social creative agency Barkley, the Chewy Channel sees gummy bears become characters in a batch of short and quirky series. These include a workplace comedy called Bearly Corporate and a fantasy show named Sour Sorcerers.

A new series is scheduled to drop on the Chewy Channel every month. But if you're still making your way through the top Netflix documentaries for graphic designers, fear not. Each series runs for just five minutes in total, making it incredibly easy to binge-watch the lot. Think of them as suitably snack-sized bites of content.

To discuss the thought process behind the Chewy Channel, Katie Waller, vice president of marketing at Haribo, told Little Black Book that, "we know that when our fans open a bag of Haribo, they’re inspired to play with the gummies before enjoying a sweet treat. It’s part of the fun.

“We’ve been creating moments of childlike happiness for nearly 100 years, and this mission of inspiring joy through treats and listening to our consumers is what fueled the thinking behind the Chewy Channel.”

It's a cute idea, but will it hold the attention of audiences? Older viewers will surely skip it and the younger IGTV users, who we assume the Chewy Channel is targetting, have plenty more engaging online distractions to choose from. That's even before the launch of the behemoth that is Disney+.

And while we can't quite get our head around why exactly the Chewy Channel exists, other than to function as a Haribo advert, although we kind of admire the amount of effort that's gone into the shows.

Each series boasts handmade dioramas, and the cast of sweets are controlled by small wires, magnets and fishing lines. On occasion you can even see these tools in shot to keep the tone light. After all, these are fun little clips that are designed to appeal to your sense of humour as well as your tastebuds.