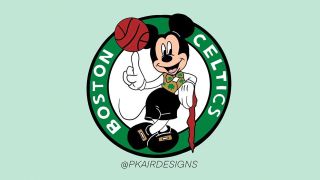 One of PK's NBA/Disney logos (Image credit: PK on Instagram)

A graphic designer has created an ambitious series of Disney-themed NBA team logos to celebrate the return of the sport at Disney World in Orlando, Florida later this month. With 22 teams featured, each team logo has been redesigned to include a famous face from the world of Disney.

With teams such as Chicago Bulls, Washington Wizards and Orlando Magic all featured, fans of both Disney and NBA are going wild for the designs. We think they serve as some pretty neat logo design inspiration – each Disney character feels perfectly suited to its accompanying team (especially Toy Story's Rex and the Toronto Rapters).

Designer Phoebe Williams, aka PK Air Designs, shared the whole series on Instagram (above), and fans loved the crossover collection. As well as calling the designs "amazing" and "so much fun", many of the commenters insist that they be turned into T-Shirts. The logos were even spotted by American sports channel ESPN, which shared them with its 35M followers (below).

"I thought it would be a really fun idea to create mashup logos!" Williams told Popsugar. "All of the characters  were chosen to match the aesthetics of the logo. Some of them don't necessarily match the original, like Dumbo for the Hornets or Ariel for Miami Heat, but at a first glance they look like the original and that was my main goal."

We love an unusual Disney concept, like these strangely adorable Disney character 3D fossils. And if you're a Disney fan adjusting to life outdoors, stay safe in style with these Disney face masks.