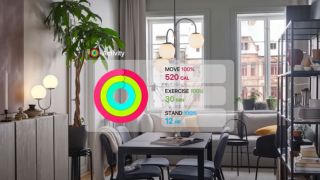 Many have tried, and many have failed to make smart glasses a 'thing' – including tech giants Amazon and Google (Amazon Echo Glasses, anyone?). This particular type of wearable tech just doesn't seem to catch on. But a recent concept video makes it seem possible that things could change, and all it's taken is the stamp of the Apple brandname.

Recent leaks suggested that Apple is working on some eye-wateringly expensive VR spectacles and, in response, a concept designer created this pretty impressive concept video (check out the best video editing software to craft your own), imagining how the glasses could turn out. It may all be speculation (sorry) but the ad contains enough potentially accurate features, slick design and on-brand messaging that we almost believe it could happen. And, dare we say it, be popular.

The creator, the Hacker 34, who has a YouTube channel full of convincing concept videos, introduces his version of Apple Glass with the tagline 'Your eyesight just got smarter'. The specifications he's included are widely in line with those churned out by the Apple rumour mill. His descriptions describes the glasses as having: "Breakthrough hardware with unique dual transparent Retina screens, G1 chip, advanced LIDAR, all day battery life, fast Wireless charging, frame touch controls or AirSwipe, powered by the most advanced AR operating system rOS (Starboard UI) and even more."

These impressive-sounding technical specs work to superimpose the info you'd usually find on your iPhone screen right in front of your eyes. You'd control the action by swiping on the frame or by performing an AirSwipe.

Some of the features, like sliding through your notifications or activity stats, work in a similar way to the Apple Watch (basically negating the need to get your iPhone out of your pocket). But the Hacker 34 envisions the AR kicking in for situations like finding your iPhone, or navigation. While we agree on the usefulness of this, we do question the safety of the huge blue line that pops up in the middle of your vision – especially when driving, as in the concept (below).

However, the production of the video and the copycat branding do make the prospect of the Apple Glass pretty exciting – an emotion we weren't really expecting to feel about this product. The design is convincing – slimline and unobtrusive – plus, we especially enjoyed the nod to the Steve Jobs Heritage Edition.

It may be the positioning as an iPhone accessory that saves the Apple Glass from the same fate as other smart glasses, which were marketed as standalone pieces of tech (albeit with Amazon's offer of strapping Alexa on your face for eternity – who wouldn't want that?). We do see more potential in smart specs as a sort of enhanced Apple Watch.

Exciting concept designs have been coming thick and fast lately, with the recent mechanical keyboard concept, and this folding iPhone design sparking enthusiasm across the web. But, no matter how good the concept design might be, it's still quite a statement to put tech on your actual face, and the jury's out on whether anyone really wants that, no matter what brand is pushing it.