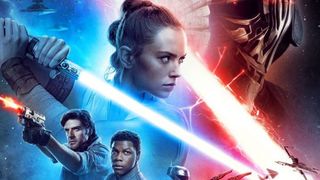 Star Wars: The Rise of Skywalker is coming to Disney Plus next week (Image credit: Disney)

With May around the corner (nope, we can't believe it either), there are just a few days until the most important day in every Star Wars fan's calendar: May the 4th. If, like Luke Skywalker, you've been living on a remote island (and drinking weird green milk), May the 4th is officially Star Wars Day – because of its aural resemblance to a certain iconic phrase from the franchise.

With a myriad of Star Wars content now on hit streaming service Disney Plus (which you can currently sign up to for free), Disney has been busy getting prepped for this year's May the 4th celebration. Earlier this week the company encouraged fans to reply to a tweet with their favourite Star Wars memory, which might appear "somewhere special" on the day itself. Disney's first tweet was all well and good, but a follow-up tweet sparked a swift backlash from fans – and lawyers:

By sharing your message with us using #MayThe4th, you agree to our use of the message and your account name in all media and our terms of use here: https://t.co/G0AyToufQ5April 27, 2020

Disney appeared to be claiming that anybody tweeting with the hashtag #MayThe4th gave permission for their tweet and username to be used by Disney, as well as agreeing to its terms and conditions (which are around as long as War and Peace). Taken on its own, the second tweet effectively seemed to suggest that Disney owned the hashtag. Understandably, there was some backlash to this apparent display of force (couldn't help ourselves, sorry) from Disney.

Twitter users piled onto the tweet, with several tagging CEO Jack Dorsey to suggest he intervene. "Not how hashtags work", one lawyer tweeted. "My favourite Star Wars memory would have to be the time Disney tried to lay legal claim to every tweet using a particular hashtag," said another user.

Eventually, the Disney Plus account clarified its meaning: "The above legal language applies ONLY to replies to this tweet using #MayThe4th". So, there we have it – the policy only applies to those responding to Disney Plus's specific tweet along with the hashtag. Disney doesn't own the #MayThe4th across the whole of Twitter – great news for the 0.01% of users who might be using it because, rather than Star Wars, they just like the date.

With all that legal business cleared up, we can now look forward to the day itself, which promises to be a big one for Star Wars fans with a Disney Plus account. Perhaps the headline news is that Star Wars: The Rise of Skywalker will be landing on the streaming service that day, along with a documentary exploring the making of The Mandalorian – great news for Baby Yoda fans (ie. us). Watch the trailer for Disney Gallery: The Mandalorian above.

One thing's for sure, you'll want to grab that 7-day free trial of Disney Plus in time for Star Wars Day.