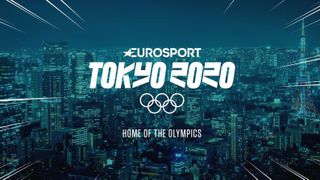 There's just over a year to go until the opening of the Olympic Games Tokyo 2020. To get ready for the biggest event in the sporting calendar, television network Eurosport recently unveiled its official logo and brand identity for the games. And in a distinctive bit of design, the identity takes its inspiration from Japan's signature art style: manga.

The channel, which describes itself as the Home of the Olympics in Europe, settled on the logo (above) as a way to bring Eastern and Western cultures together. It claims that the angular typography borrows from the comic books aimed at both adults and children. Eurosport also hopes the Tokyo 2020 logo also wants to usher manga into a new era.

Given that plenty of artists around the world want to learn how to draw manga, it makes sense to target this aesthetic. The versatile identity was announced in a tweet (below) and is designed to smoothly integrate with the Eurosport logo and the image of the Olympic rings.

The Olympic Games are coming 😍 Introducing the official Eurosport logo as we begin the countdown to @Tokyo2020 #500DaysToGo pic.twitter.com/hLGv6ah4yuMarch 12, 2019

In a blog post about the new identity, Eurosport's Vice President of Marketing, George Aivazoglou, said: "We wanted our Tokyo 2020 brand identity to create a unique symbol that incorporates and respects Japanese culture and the iconic Eurosport logo, to become instantly recognisable and resonate with millions of people watching the Games across Europe."

And over the next 18 months, sports fans and viewers can expect the identity to underpin Eurosport's marketing campaign ahead of the opening of the games on 24 July 2020.

"With this design we believe we have created a visual identity that is versatile, conveys the dynamic side of the Games and engages younger generations – truly visionary," Aivazoglou adds.

Of course, it remains to be seen how the full marketing campaign will be put into action. However, we hope that as it progresses, the identity will include more overt manga allusions.

As it is, we're struggling to see the link between the design and manga. The angular lettering is, at a push, reminiscent of the Japanese alphabets. And while this is a nice touch, it currently feels like a bit of a stretch to make the comic connection. The lettering also has legibility issues as the number '2' in 2020 is easily mistaken for the letter 'r'.

For a list of amazing typefaces that do nail their design both in terms of theme and appearance, why not check out our list of the best free fonts available to designers right now?