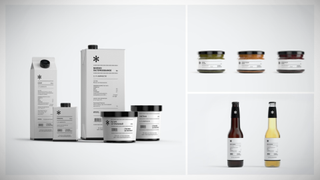 When faced with a problem, limited resources can sometimes lead to the most creative and effective solutions. For advertising agency Jekyll & Hyde, the problem was that it needed to find a Russian-speaking art director to design cool packaging. And even worse, it had no budget for a talent search.

Yet despite this, the agency managed to attract thousands of CVs from relevant candidates at a cost of $0, all thanks to a clever piece of copywriting.

Given that art director positions are one of the most coveted roles in the industry, it's fascinating to see how agencies go about recruiting people for the job. If you've always wanted to be one, check out our guide to all you need to know about being an art director, and also check our design jobs board.

So how did Jekyll & Hyde filter down potential candidates? Simple, it spoke to them in their own language.

In a recently released video (below), the agency reveals that it distributed a packaging concept with labels that advertised the art director role – see our packaging design for more inspirational creations. However, given that the labels were written in Russian, only relevant (or at least, Russian-speaking) designers were able to see the vacancy and apply.

"When the packaging was published, the ad was understood only by our target audience, i.e. Russian-speaking designers," the video explains. "For everyone else, it was just ordinary packaging."

As far as filtration methods go, this one is so effective that we're surprised that it isn't more commonplace. (Or maybe it is and we just don't see them...)

And for Jekyll & Hyde, the campaign paid off. The concept designs appeared in front of thousands of designers after being shared by the likes of Packaging Of The World, and the agency was flooded with CVs and portfolios from its target audience.