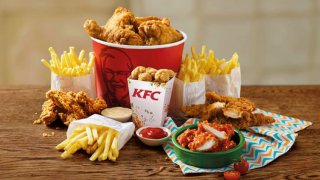 We do enjoy a little bit of brand warfare here at Creative Bloq – it can often lead to some truly witty creative work. The most frequent battles seem to involve fast food giants (such as McDonald's and Burger King) and while chicken might be its thing, KFC is prone to the odd bit of online beef. Its latest victim: Iceland (the supermarket, not the country).

When Iceland ran an ad on Instagram Stories showing off its range of "stay home" takeaway alternatives with the line "Missing KFC?", it was spotted by none other than the admin of KFC's Twitter account. Cue an iPhone screenshot. If, like KFC's Twitter admin, you're currently working from a phone, maybe it's time to look at our list of the best laptops for graphic design.

Along with the screenshot, KFC tweeted the comeback: "This is why my mum goes to Tesco" (see below). KFC fans applauded the response on Twitter, calling it a "biblical tweet", and KFC "the best Twitter account going". But while we've often appreciated KFC's forthright voice on social media, we're not sure this was one of its best-executed attacks. Here are three things we can learn from this particular tweet:

This is why my mum goes to Tesco. pic.twitter.com/iSuckw8qbTApril 19, 2020

If KFC wanted to parody Iceland's famous slogan, they could have at least got the words right. It's "That's why mums go to Iceland" rather than "That's why my mum goes to..." Details matter.

02. Don't do brand management from your iPhone

This one is inexcusable. We did not need to know that KFCs Twitter admin has allowed their iPhone battery to drop below halfway. That's too much information – even in this lockdown age of Zoom calls in messy bedrooms. And if there wasn't a charger nearby, a simple crop could have stopped them from sharing their private charging habits with the world.

Sure, if Iceland had been dissing KFC, then a "biblical" comeback may have been warranted. But if anything, wasn't the frozen food chain actually being quite... nice? At the time, KFC 'restaurants' were closed across the country (some have since reopened for delivery), so it's quite reasonable to assume that people were missing their KFC – and Iceland is simply acknowledging that it's something worth missing (while admittedly flogging its own version).

Yes, yes, perhaps we have just as much time on our hands as KFC's social media admin. Perhaps we can forgive them for a slightly shoddy tweet during these strange times. We're just looking forward to when the burger wars return to their heady, high-budget heights. If you too are dreaming of different days, why not reminisce about this February's battle of the mouldy burgers?