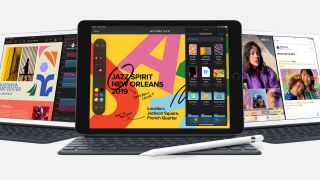 Cyber Monday is well and truly here and we are still reeling from all the deals we've seen over the last few days. Honestly, there are offers on brand new hot ticket items that have really surprised us. One such offer is on the brand new 2019 iPad. This 10.2-inch model has been on sale at Target for just $229, this deal has not surprisingly sold out, but keep checking back in case it comes back into stock. And it's still on Amazon as we speak (write) for just $249.

Seriously, this is a really, really cheap deal for such a capable iPad. This latest model has a 10.2-inch Retina display and a A10 fusion chip. It's compatible with the Apple Pencil, making it ideal for creating on the go. And there's up to 10 hours of battery life, so you won't even need to remember your charger.

There's also some really good deals to be had in the UK, including this £298 offer on the 32GB model at Amazon.

Apple iPad 10.2" | 32GB | WiFi: £289 at eBay
Save £60: The savings aren't as big in the UK but this is still a ridiculously cheap price for the brand new iPad. This same version is available on Amazon at £298. There are also Amazon deals on the higher specced versions, such as the 128GB model.

Not found what you're after? See all today's best deals below.