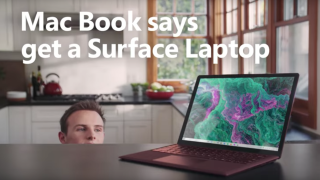 As far as rival businesses go, companies don't get much more competitive than Microsoft and Apple. The two have form when it comes to making fun of each other in their marketing, remember those "I'm a Mac, he's a PC" ads? But Microsoft is getting even more personal in its latest advert, which sees someone called Mac Book explain why the Surface Laptop 2 is superior to the MacBook Air.

(Struggling to choose between the two? Check out the best Microsoft Surface deals and the best MacBook Pro alternatives to help you decide.)

The campaign is a cheeky move on Microsoft's part. In the advert (below), the computer company has enlisted the promotional skills of an Australian man whose actual, real name is Mackenzie Book to help sell the strengths of the Surface Laptop 2.

A snarky voice over asks Mac Book a series of questions about which device performs better. Unsurprisingly, he points out that the Surface Laptop 2 lasts longer and performs better than the MacBook Air. If you look carefully, you'll also see that he barely even interacts with the Apple device.

It's a clever campaign, and we can only imagine Microsoft's excitement when they discovered that Mackenzie Book was happy to get involved. It's also handy that he apparently seems to prefer the Microsoft device. It would be pretty awkward if he mouthed off about how much he admires the strength of Apple and the way it works with photo editing apps.

We'd forgive you for thinking that Microsoft could've just made up this Mackenzie Book character for its promotional needs. But given the stilted delivery of lines like "you should get a surface. Trust me, I'm Mac Book", we're willing to bet that this a real guy who happens to have an on-brand Apple name.