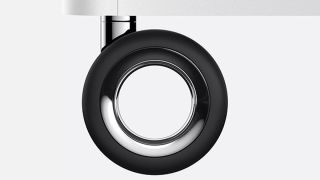 At $100 each, these are true wheels of fortune (Image credit: Apple)

When Apple revealed the new Mac Pro in November, it also announced that a set of optional wheels would be available for the heavyweight machine. It wasn't until a month later that the price of said wheels was revealed: $100. Per wheel. That adds an eye-watering $400 to an already eye-watering $5,999 for the Mac Pro (and that's only the basic model), with the option of adding a maxing out the specs for a grand total of over $53,000. We'll give you a moment to dry your eyes.

So problem number one is the cost. And now, YouTuber Marques Brownlee has discovered another pretty major flaw with those wheels: they don't have brakes. So, if you're planning to use them, you might want to take a spirit level to your desk or floor first. If it isn't perfectly straight, your $53k Mac Pro might just roll off into the sunset (and it won't be rolling into our best computers for graphic designers list at that rate).

#protip don't get the wheels if you keep this thing on your desk. There's no locks. pic.twitter.com/NfkqQiNKYCFebruary 26, 2020

After watching Brownlee's video, the omission of some sort of wheel lock seems pretty glaring. And when it comes to suggestions for how Apple might fix the problem, Twitter users are on a roll (ahem). We're particularly fond of this Wedge Pro concept (and its genius tagline) by the ever-reliable @JonyIveParody:

While we did gawp at the price of the Mac Pro and its many upgrade options ($999 for a display stand?), we did concede that it isn't aimed at most creatives – you're more likely to find it rolling around the offices or production suites of companies with lots of cash to burn. If you're looking for something more affordable (and less likely to run away), see today's best deals below.