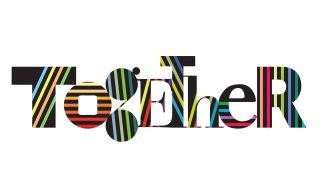 Milton Glaser, the celebrated graphic designer who died aged 91 on Friday, was working on a brand new project in his final weeks, according to the New York Times. The design was conceived as a response to the coronavirus pandemic.

"I’m actually developing something I haven’t shown to anyone," Glaser told the New York Times in one of his last ever interviews. "It is simply a treatment of the word Together.’’ The design features letters of various fonts and sizes containing stripes of several colours, with each letter touching. If you're inspired by Glaser's striking typography (below), you might enjoy exploring our best free fonts.

At the time of his death, Milton Glaser was working on a graphical treatment of the word “Together,” to evoke the idea that during the separation of the pandemic, “we have something in common.”https://t.co/KK5tnmhd2CJune 29, 2020

Jeremy Elias of the New York Times emailed Glaser five weeks ago to ask whether "some form of artistic expression," similar to the designer's famous I ♥ NY logo, could help to galvanise the ailing city during Covid-19. Instead of a mere email response, Elias was stunned to receive a FaceTime call from Glaser himself, in which the designer described his unfinished 'Together' project.

Glaser told Elias he had no idea if the new logo would become as iconic as I ♥ NY, but was committed to continuing working on the design, which he hoped to distribute to school students across the city of New York. He also explained why the logo makes no explicit reference to New York itself: "I want this identity to be adapted by others who are not New Yorkers. This is of course a world problem, not a New York problem."

While we'll never know what Glaser's finished design would have looked like, the work-in-progress is already an uplifting and striking typographical design that we'd love to see take off like I ♥ NY.

From the I ♥ NY logo to his famous 1967 poster of Bob Dylan (above), Glaser's iconic output has made him one of the most celebrated graphic designers in the United States. Since his death last week, Artists and designers across the world have paid tribute to Glaser and his profound impact on the world of graphic design.