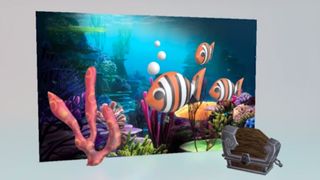 For a lot of people, MS Paint is one of the first digital art tools they'll ever use. And while some might write it off as a gimmicky app, there's more to the Windows tool than just filling in squiggles with the paint bucket. In fact, it looks like Microsoft have been secretly working on a major Paint refresh, which will introduce support for 3D objects, stickers and touchscreen editing.

Thank to a video demonstration and what appears to be part of a series of tutorials unearthed by Twitter user WalkingCat, it looks like the complete overhaul of Paint is just around the corner.

Thanks to new painting tools that allow users to create with a pen via touch screens, this updated version of Paint is set to give artists greater control over their work. The introduction of 3D tools also makes it easier to create 3D art without having to use more advanced software.

With a simple interface, artists can whip up 3D elements quickly and even blend them with 2D backgrounds. A range of unique brushes allows users to paint straight onto 3D objects, which can also be decorated with stickers. On top of this there is a community packed with 3D content including pre-rendered objects.

The new app is currently only available to certain testers, but many suspect that a formal announcement will be made at Microsoft's Windows 10 event on 26 October. Considering Microsoft Paint was released alongside Windows 1.0 way back in 1985, it makes sense that such an integral tool will get a prestigious release.