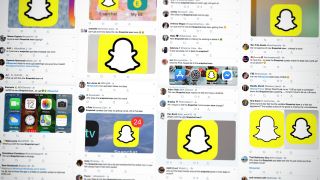 A big redesign is the perfect way to get internet blood boiling, but nothing could have prepared us for the howls of online anguish this morning over Snapchat's new app icon.

Twitter is currently awash with angry young things voicing their displeasure over the new icon, which started turning up on people's iPhone and Android apps last night with the latest update. So it must be a pretty radical redesign, right?

Actually, no. It's almost identical to the old logo; the only difference is that the stroke width on the spooky Snapchat ghost has been increased a bit. And considering that the icon features a white ghost on a yellow background, this is a pretty good move from an accessibility point of view.

However it hasn't gone down at all well with Snapchat's users, who are waking up today, discovering that their beloved phantom is a bit chunkier around the edges, and by Jiminy they're furious, variously describing this bold new look as ugly, aggressive and, weirdly, like the cartoon version of something that got stuck in the real world. It seems to be making plenty of users uncomfortable and lots them of are resorting to taking the icon off their home screens and hiding it away where it can't upset them.

The new Snapchat icon looks like the cartoon version of something that got stuck in the real worldAugust 12, 2019

Does anyone else feel like the updated Snapchat icon is a little too aggressive? The bolded outline of the ghost is making me uncomfortable. pic.twitter.com/QiOSS4WmF4August 12, 2019

Snapchat updated its icon and I’m so uncomfortable for some reasonAugust 12, 2019

If this seems like a bit of an overreaction, bear in mind that last year 1.2 million users signed an online petition demanding that Snap reverse a redesign that they felt uncomfortable with. And while we're not sure if this latest redesign is going to provoke quite that level of ire, considering that Snap's response to last year's petition was to basically say tough luck, we can be pretty sure that this new icon's here to stay.

And while you probably feel that the new icon really isn't different enough to warrant so much online anger, we kind of understand. For Snapchat's young users, that icon is a familiar totem that they've known for a long time. For it to unexpectedly change overnight is a big deal to them; it's like, oh, Elvis dying, or Zayn leaving One Direction, or (trigger warning) BTS taking a break.

We get it. We feel your pain. And all we can say to you right now is that, hey, you'll get used to it. Just take it one day at a time. Everything's going to be all right. Promise.