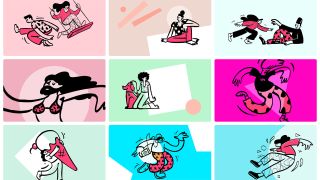 A bit of illustration can be an excellent way to enliven a design and bring a bit of humanity to it, particularly when it comes to web design. It's hard to spend any time on the web without coming across a collection of illustrated cartoon figures promoting a new startup; it's one of those hot web design trends that's not going away.

If you want to incorporate illustration into your designs but don't know how to draw or where to start, here's a brilliant solution from Pablo Stanley. He's created a library of hand-drawn illustrations called Open Doodles, and he's released them for free under a Creative Commons licence so that you can use them in any way you wish.

Stanley's a big advocate of open design; he explains that when he was young and wanted to get into digital design he had no money, so had to pirate software and steal CDs from tech magazines in order to learn his skills – at least, until he got caught. "I now offer my stuff for free," he says, "because I know other people are equally eager to learn and are looking for guidance, anywhere they can. I hope that opening my work helps them grow, get better at their craft, and make their parents proud."

They may be free, but Stanley's Open Doodles don't compromise on quality. Rather than simply release his illustration as a set of static PNGs, he's making the actual source files available for download, so that you can check the layers and see how everything fits together, as well as getting a glimpse of his untidy process. "The opportunities to improve, build on top of, fix, and reinvent are yours to discover," he says.

While some of the Open Doodles are scans of hand-drawn sketches, most are illustrations that were drawn on an iPad in Procreate, vectorised in Illustrator and then made into a library with global styles in Sketch before being exported as both SVG and PNG.

As well as the downloadable images, Stanley has also built an Open Doodles Generator along with developer Fang-Pen Lin. This provides a straightforward interface that enables you to change the colours of the ink, accent and background for the illustrations, and then download a custom illustration pack in your chosen palette. There's also a set of ready-made compositions to make life even easier, as well as a gallery of example landing pages demonstrating how these illustrations can be put to work online.

Under the CC0 license you're free to copy, edit, remix, share, or redraw the Open Doodles images for any purpose, without restriction. Stanley hopes that this will encourage other designers to create their own kits and share them with the world, and that Open Doodles will make it easer for designers to show the value of illustration in mockups.

And while he's making his illustrations available for free, he also hopes that designers will use them as placeholders before going on to hire actual illustrators to help to help tell their stories; he even provides a set of useful links.

To find out more and grab your own free illustrations, hit the Open Doodles site.