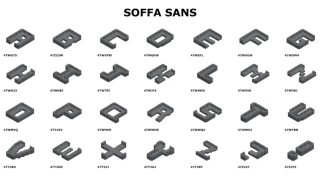 Swedish furniture giant IKEA has moved into the world of type design with the launch of Soffa Sans. Described by IKEA as the "comfiest font ever", the typeface was inspired by customers who played around with its sofa-building tool.

Soffa Sans is unlike any of the best free fonts for designers we've previously seen. That's because the letters are made up of carefully arranged couches, effectively using the furniture as pixels to spell out characters.

The font was announced on Twitter, with IKEA acknowledging that the typeface took its lead from people having a laugh with the chain's couch design tool, VALLENTUNA.

We loved your sofa planner creations so much they inspired the comfiest font ever. Meet SOFFA SANS. Download here https://t.co/ZdMyFuahqM pic.twitter.com/IIHnDHWwFOJune 28, 2019

So what connects a sofa design tool with typography? Well, keep in mind that if you give social media users the chance to personalise something, they'll likely come up with something humorous. Think of Soffa Sans as the Boaty McBoatface of fonts.

And VALLENTUNA gives people lots of opportunity for customisation. Originally it was intended to give homeowners a chance to create the ideal layout of their sofas, but it wasn't long until people started getting creative with the tool. And that included spelling out messages.

who wants to buy me this $8700 couch that looks like a goat that i designed on the ikea couchbuilder pic.twitter.com/Brbas3riD4June 24, 2019

#IKEA People are getting creative with a build-your-own couch option 🛋 https://t.co/11dOrWaFWQJune 23, 2019

Not one to be left out of the joke, IKEA worked with customer experience agency Proximity London to launch a fully-realised font family built around VALLENTUNA.

Speaking to The Drum, the living rooms sales leader for IKEA UK and Ireland, Marcos Tejedor, said: "We've been really enjoying seeing the fun that people are having with our sofas, and the innovative solutions they are creating.

"Inspired by their creativity, we've launched Soffa Sans: the world's comfiest font. Its modular form and relaxed letter-spacing makes it one of the most versatile fonts out there and we're looking forward to seeing where it’s used."

The font is available to download for free in a range of colours and sizes from the IKEA site. And that's just as well, because The Drum crunched the numbers and realised that it would cost £106,320 to purchase the 1434 sofas that make up the typeface.

This is a great example of a brand listening to what its audience is getting up to and owning the joke. And if anyone knows how to use humour, it's IKEA. We're still chuckling at its cheese grater ad, which had a pop at Apple's new Mac Pro.