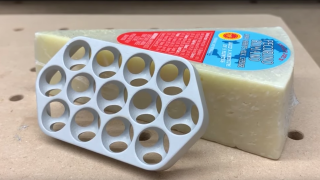 When it was released last month, Apple's new Mac Pro caused quite the stir, boasting incredible specs at an eye-watering cost. However much of the talk focussed on the machine's unusual design, which many likened to a cheese grater.

Was this a fair comparison or an unwarranted jibe? To settle the matter, YouTuber Winston Moy has created a replica of the tower to see whether it can in fact grate cheese. So forget whether or not the Mac Pro is set to become one of the best computers for graphic designers, let's take a look at how it serves as a kitchen utensil...

As you can see in his comprehensive seven minute video, YouTuber Winston Moy puts the matter to bed by proving that the Mac Pro does not actually grate cheese all that well. Keep in mind that Moy doesn't test an actual Mac Pro though. We don't blame him either, seeing as the upcoming computer is set to cost a hefty sum and there won't be Prime Day deals this year to bring the price down. You don't exactly want to clog it up with strips of cheddar.

Moy isn't the first person to find an inventive use for the Mac Pro's cheese grater aesthetic though. Only recently IKEA released a tongue in cheek advert promoting its cheese graters with the phrase "designed for apples". With its clever use of typography, this IKEA ad is one of the best print ads we've seen in a long time.

And if this video has made you hungry to try out Moy's model for yourself, he's shared the files for his Apple Mac Pro-inspired cheese grater on his Thingiverse page. Although he admits it's better suited to being a soap dish than a cheese grater.