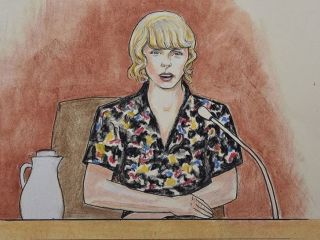 The civil trial between pop music phenomenon Taylor Swift and former Denver DJ David Mueller (AKA 'Jackson') made headlines recently as the pair battled it out over groping accusations that may or may not have impacted the DJ's career. However, some people have been drawn to the trial by the quality of the court sketches.

Drawn by Jeff Kandyba, the sketches of Swift in particular have been heavily examined and criticised by fans due to their questionable likeness. Given that the music industry is image-obsessed, it's perhaps unsurprising that these sketches have temporarily stolen the focus from the legal proceedings.

Swifties and cynical onlookers were quick to take to Twitter to crack wise about the sketches. Professional writers and columnists took the time to make tiresome jokes that the singer's rival, Katy Perry, had drawn the sketches in an attempt to damage her public image, while others compared the artwork to that of Tom Brady, another court sketch artist whose work has caught public attention recently.

Despite the criticism, Kandyba says that plenty of people surrounding the Denver courthouse have been saying kind things about his work.

Speaking to the Boston Globe, Kandyba reveals that he prepared for the trial by studying pictures of Swift.

There's a problem with this approach, though. “They’re all glamour shots," he reveals. "She’s not like that in the courtroom. She’s not doing a lot of smiling.”

Capturing a person's likeness can be hard enough at the best of times. Add to that a high profile court case and a face that lots of people feel very possessive over, and you get a high standard that's very difficult to live up to.

And now that the DJ's lawsuit against Swift has been thrown out, it looks like Kandyba won't get a chance to refine his likeness of the singer.