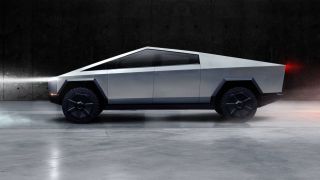 The fallout from Tesla's Cybertruck launch keeps on coming, and this time it involves the Golden Ratio. First the Cybertruck's 'armor glass' windows were shattered by metal ball bearings during a demonstration, then its eccentric design was ripped apart by designers. And to top it all off Lego poked fun at the vehicle by making a shatterproof version of the electric truck out of its distinctive plastic bricks. Can't it do anything right?

Well, apparently not. In the latest in a punishing series of hot takes, the Golden Ratio has been applied to the eccentric Cybertruck, but designers aren't buying the idea that this miraculously validates its bizarre design.

If you're not familiar with it, the Golden Ratio (below) is a common mathematical ratio roughly equal to 1:1.61 that describes the perfectly symmetrical relationship between two proportions.

It's often superimposed onto classical pieces of art or architecture in an attempt to explain why they look so pleasing, however this doesn't mean that slapping it over something as fugly as the Cybertruck instantly transforms it into a Renaissance painting.

In a r/Design post by user Sir_Lancelot_Papaya, Elon Musk's problematic pickup truck is overlaid with the mathematical ratio that's often used to create pleasing, organic-looking design compositions. "If you're wondering why despite its unusual design characteristics it still looks "balanced", this is one of them," Sir_Lancelot_Papaya explains.

But as far as the comments on the post are concerned, this is just a load of numerological nonsense. Not only has the post attracted criticism of the vehicle, as user Willy_1967 so eloquently explains "Its still f**k ugly", it's also led to heated debate as to whether the Golden Ratio carries any weight to begin with.

According to user owlpellet, the Golden Ratio is, "1800s psychologist quackery. Kindly ignore it", while wabiguan says, "the golden ratio is a bullshit concept, it doesn’t apply as universally as ppl like to believe." Ouch.

It doesn't help that the image Sir_Lancelot_Papaya posted doesn't even appear to follow the 1:1.61 ratio, instead coming in at 2.612. Top commenter wotoan sums up the general mood of the comments section by saying, "this is just picking random dimensions off the truck and seeing if anything recognisable comes up."

There's no arguing that Tesla's Cybertruck has been divisive, but we didn't expect it to undermine one of the fundamental design principles. What will it destroy next? Colour theory? Kerning? Only time will tell.