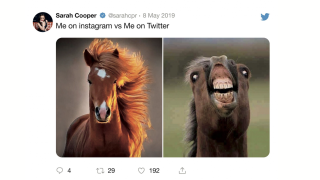 Picture the scene: you wake up late, you don't have time for a coffee, you're rushing to get the train... then you see one of your goofy tweets blown up into a giant billboard on the subway wall.

As bizarre as it sounds, that's what's happened to a handful of Twitter users. The social media platform has recently launched a campaign which turns user statuses into funny ads that are up there with the best pieces of billboard advertising. All of the featured statuses see the user compare how they use Twitter to other social media platforms, such as Facebook, Instagram and LinkedIn.

For Twitter, these statuses are a branding goldmine. They help to define Twitter as a site where people go to unwind, tell a joke, and stop taking themselves so seriously. It's also a place where everybody hated on the new Twitter design, but we don't blame the site for turning a blind eye to those tweets.

The campaign can be seen in San Francisco and New York City subway stations until 9 August. A total of 31 tweets will be turned into billboards, take a look at some of them below.

And their appearance in the wild has got the people who wrote the tweets excited.

If you've been paying close attention to Twitter recently, you might have noticed that something was afoot. Not only had the official Twitter account replaced its banner image with the eyes emoji, but it also decided to unfollow the company's founder and CEO, Jack Dorsey, and start following 27 apparently random people.

Of course, these 27 accounts aren't quite as disconnected as it first appears. They're the lucky people whose tweets will feature in the advertising campaign. All because they posted a witty status that puts Twitter in a good light.

If we overlook how shocking it must be to see your tweet as a billboard, not to mention that displaying user content without permission could be seen as an ethical grey area (whatever the privacy policy says), this is a funny campaign that cleverly gets extra mileage online thanks to people's startled reactions.