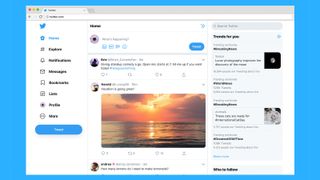 There's nothing like a redesign of a popular app or service to really get people's blood boiling. It's not so much that everybody fears change, more that enough people fear change to make a really loud noise about it when it happens.

Considering how cross people get when a company unveils a new logo design, a whole new site redesign is bound to make waves. So given the news that Twitter is rolling out a completely revamped website with an updated look and feel, well, you can guess the rest. Folks aren't happy.

And to be fair, there's a lot to dislike about new Twitter; everything that you hate about the app version is now there on the desktop. So for example, by default it'll show you a timeline based around 'top tweets' rather than a straightforward chronological list. You can opt for it to show you tweets chronologically, but sooner or later it'll dump you back into the 'top tweets' view, much the same as Facebook does with its 'top stories' and 'most recent' timelines.

A team of highly paid people thought this looked good and is user-friendly 😢 #NewTwitter #missedthemark pic.twitter.com/UXVdkx8WcfJuly 15, 2019

There's some weird redundancy going on in the form of the new 'Bookmarks' feature, too. Up until now, virtually everyone used the 'Like' function as a bookmark; it did the job and as a bonus it also made people slightly happy. Not as happy as getting an actual retweet, but them's the breaks. Now, though, there's a new icon beneath every tweet, reminiscent of the iOS Share icon, that lets you add a tweet to the new Bookmarks section of your profile.

In the same dropdown there's the option to copy the link to that tweet, something that used to appear in the dropdown at the top right of tweets, along with the option to embed a tweet, amongst other things. Weirdly, the embed option is still up there, even though it's in the same functional ballpark as the copy link option.

It all feels like a bit of a mess; in its blog post, Twitter lists all the exciting new features that have been added, most of which are things we're pretty sure you've never wanted. It's all summarised in this little video:

It's not all bad; the two dark mode options are a welcome addition, and the easy switching accounts will be a bonus for anyone with more than one account on the go. But those little benefits feel like less of a win next to that ludicrously fat sidebar menu and in-your-face trends, and the fact that when you're scrolling through your timeline, everything feels a bit sluggish and stuttery.

The big win for Twitter here is that this new site is a PWA that'll work on everything, and that's designed to look amazing on most mobile devices. We suspect a part of the problem is that, like mobile-first sites, PWAs rarely look quite as good in a desktop browser. One advantage of PWAs is that they can be installed as stand-alone apps, which may result in better desktop performance.

The big issue, though, is that people plain don't like change, and the #NewTwitter hashtag is overflowing with rage right now.

If #NewTwitter is here to stay, please address a few things:- The left menu bar taking up 1/3 of full-screen is ridiculous. Please give the option to move it to the top.- Clicking a tweet shouldn't require you to click back, sometimes causing a refresh.- Mini-graphs gone?July 16, 2019

Twitter joins reddit with a design that's made for everyone and pleases no-one. Can't they at least hire people who know web design? #NewTwitterJuly 16, 2019

Ultimately, though, we imagine everyone will get used to it sooner or later.

Just checking in on the #NewTwitter faux-outrage. Turns out it's the design I've been using for the last several months. Ye'll adapt. Cool the jets.July 16, 2019