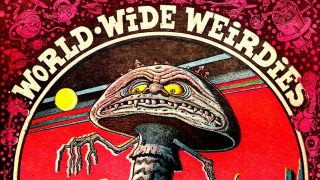 Can you remember your biggest creative inspirations? Do you have a clutch of artists whose work made you grab your best pencils and say "I want to do that"?

This is what illustration agency Handsome Frank asked its followers on Twitter. And the responses have descended into a bit of a love-in as illustrators share the artists who originally made them want to break into the industry.

It all started with a tweet from Handsome Frank to its 28 thousand followers. But over the course of the day it's drawn dozens and dozens of responses, including big names from the world of illustration.

Who was the illustrator that made you want to be an illustrator?July 31, 2019

Some of the people who responded were even lucky enough to hear back from the artists they mentioned. Making your own personal artistic hero blush with gratitude isn't something that happens every day, but that's exactly what's happening to illustrators right now thanks to Twitter.

Perhaps the social media site isn't such a bad place after all?

The responses to Handsome Frank's tweet are also a fantastic source for new artistic inspiration. There are plenty of popular and well-deserved names in the replies, but there are some illustrators you might not have heard of before.

For example, are you familiar with the work of Greg Manchess? His work meant a lot to Twitter user Sidharth Chaturvedi...

Of course, narrowing down your influences to one illustrator can be a tall order. So some people, like Erin Hunting, decided to choose four. Although if you want to follow-up her selection, maybe save Googling Robert Crumb's raunchy Fritz the Cat until you're outside of work.

A trip down memory lane usually involves some charming revelations. Just take Andy Paciorek's reply, which explains that it took him "many years" to find out the name of his illustration hero, Ken Reid. When it comes to being able to find information, you kids and your search engines don't know how lucky you have it.

One creator who has definitely embraced the art of illustration is Ben O'Brien, or to use his popular online moniker, Ben The Illustrator. But who set him on the path to become an online illustration sensation? He reveals that it was none other than the bold and brilliant Brian Cook.

What's so nice about this Twitter thread is that everyone is being so sincere. Graphic designer and illustrator Scott Duffey originally replied with a jokey response where he credits children's cartoon character Penny Crayon as his inspiration, but even he back-pedals to reveal that Albert Uderzo's drawings in the Asterix comics are his serious choice.

Sadly the names of some great illustrators are lost to time. And it's these unknown illustrators who visual artist Edêle Watters salutes in her response, as she recognises some of the nameless illustrators behind the Bunty comics.

These replies are just the tip of the iceberg. Illustrators are still chipping in with their heroes, and there are plenty more artists to discover.

So if this thread has made you remember a long-lost illustration inspiration, head on over to the Handsome Frank Twitter thread and share their name with the world.