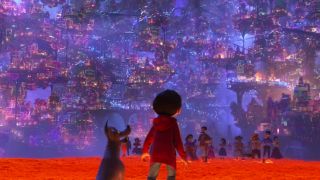 We're huge Pixar fans here at Creative Bloq, so we're over the moon to see that it's just dropped a trailer for an upcoming film, Coco. From the trailer below it looks like we're in for a supernatural tale of music and mystery. Exciting!

The visuals are of the eye-wateringly high standard we've come to expect from Pixar, but once again it looks like its raised the bar. With flickering VHS tapes and glowing cities that spiral into the sky, the imagery in the teaser clip for Coco pushes what you can do with computer animation to the limits. Although it's good to see that Coco still retains Pixar's unique character design aesthetics.

We're also happy that this isn't another sequel to a previous film. Pixar sequels have been hit-and-miss over the years, but nothing really compares to meeting new characters and following them on a journey. And if 2015's Inside Out is anything to go by, Pixar still has lots of refreshing and original ideas up its sleeve. Meet Coco below!