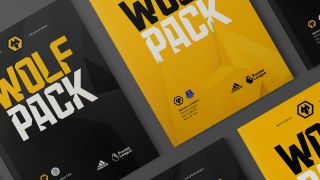 Having won the Championship and secured a promotion to the Premier League, 2018 has proved to be a good year for Wolverhampton Wanderers FC, or as fan calls them, Wolves. A nicely timed rebrand courtesy of design agency SomeOne tops off these achievements, and sees the irreplaceable Wolves logo design transformed into a 3D version and accompanied by snazzy new typefaces.

As part of its brief, SomeOne was tasked with nodding back to the club's heritage, as well as recognising the club's new ownership under the Chinese company Fosun Group.

Having been founded in 1877, Wolves have a long history for the studio to work with. In the end, SomeOne drew on Wolverhampton's association with ironmongery to forge a strong new identity that looks like it's been hammered into shape.

This new identity includes a three dimensional Wolves logo and two fonts inspired by the club badge – Wolves Display and Wolves Display Cut. Check it out by clicking left to right in the gallery below with the arrows.

Football club redesigns can prove controversial with fans, just look at the outrage surrounding the Leeds United badge rebrand. To tackle this, SomeOne consulted various groups along the way, including supporters.

“We knew not to touch the club’s iconic badge, but instead, use it as inspiration for a new 3D brand property," says SomeOne designer Tim Green. "The depth of the 3D wolf (particularly the version with lit eyes) adds a dynamic, competitive spirit that can’t be reflected in flat vector forms."

"We wanted to give a nod to the city’s industrial heritage, so opted for a bold and condensed style," adds SomeOne designer Ian Dawson. "By using the geometric forms of the eyes, we began removing cuts and angles from the letterforms. Moving forward, this allows the club to speak in a distinctive and ownable voice, without relying too heavily on the badge."