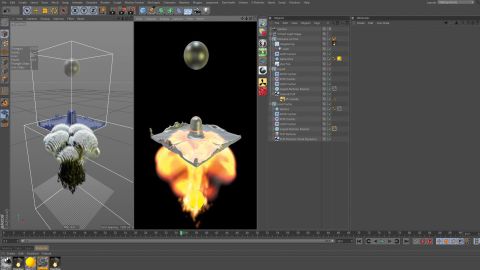 Effex 2.7 is a welcome upgrade that allows users to create water, fire and smoke effects. It just requires a bit of patience and know-how to get the most out of it.

Effects simulations are becoming an increasing mainstay of 3D art work. With the latest release of Effex, Navié has provided a full-featured simulation package which combines a range of simulation solutions from liquid to gas, and now sand, into one plug-in.

Effex 2.7 offers a huge range of options for the Cinema 4D artist who needs a simulation solution. From a dedicated FLIP-based fluid solver, to a range of gaseous, smoke and fire solutions, at first glance Effex appears to be a mini Houdini, which can live inside Cinema 4D.

The main changes for 2.7 over the previous 2.5 version are welcome; Team Render Support, a splitting of the main core architecture  to safeguard any changes that Maxon may make to Cinema 4D’s structure, which could affect Effex’s stability. This is a wise move with Maxon making clear indications it’s working hard on modernising the underpinnings of C4D. Node groups have been added, which allow the stacking of simulation elements into bespoke workflows. Also welcome is the new Indie version at a much lower price than the commercial one, which  is available for any commercial work with some constraints such as maximum turnover in a year and HD only for animations.

For users of similar plug-ins such as Turbulence FD or applications such as RealFlow, Effex definitely is a one stop-solution to quickly and easily make a sim.

Liquid, fire, gas and large water body presets are available. However, if you’re used to working under GPU acceleration for your sims, Effex seems achingly slow. That said, the meshing system is much nicer and produces better results than the one in X-Particles, and Effex works very well with Krakatoa’s particle render system.

The biggest issue with Effex is inherent to simulations themselves; they can get complicated quickly and Effex isn’t as intuitive to use, as say, X-Particles. While there’s an inherent logic to the way Effex works, what should be simple; for example caching, is not intuitive at first glance. Caches need to be loaded after they’ve been saved by pressing the Setup Cache Node.

Navié is a small company and some QA testing, both in terms of workflows and documentation from an independent source, would really help, as what seems obvious to the developer isn’t immediately apparent to the artist. While Effex does offer a complete FX solution; it does take a lot of effort and experimentation to get it to work, and that might be too much for artists on a deadline.

This article was originally published in 3D World magazine issue 209. Buy it here.

Effex 2.7 is a welcome upgrade that allows users to create water, fire and smoke effects. It just requires a bit of patience and know-how to get the most out of it.