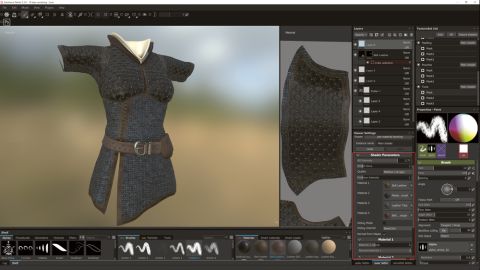 Substance Painter have listened to user requests and delivered a godsend of an upgrade. With plenty of features that facilitate workflows, this update is a must-have despite its minor flaws.

Released on the heels of Substance Painter 2.2 (SP 2.2), which had a large and welcome feature list, Substance Painter 2.3 (SP 2.3) is a small ‘top up’ of the previous version. The new version features some bug fixes and incorporates user requests – the most notable being better Photoshop export, which was probably added to facilitate SP 2.2’s new Material Layering functionality.

There’s also a new way to search for assets in the shelf and the mini-shelves, as well as projection preview channels, baker scripting, updated mask generators and UI tweaks.

The star of the last few releases is of course the dynamic Material Layering function and the added functionality it brings with it. Targeted primarily at game engine workflows, you start with an all model encompassing base layer, on top of which you mix and mask up to three additional non-smart materials (or textures).

The workflow aims at removing another step from the generic asset texturing pipeline, namely the Photoshop-based black and white masking – and the manual render-tweak-render workflow that goes with it. This makes it easier to share materials rather than final textures across your assets; said materials can be pure materials, or a mix of animated materials, textures and decals.

Interfaces and APIs have both received a bump in functionality, so it’s even easier to set up your JSON to run between Painter and your engine’s material setup system. Another plus is that the expansions to the scripting API make the bake-automation process easier.

New in SP 2.3 is the Export to Photoshop plug-in. Simply press the Photoshop icon on the toolbar, and Painter will export your entire texture set into Photoshop, which is a godsend for both masking and detailing. As not all layer modes are compatible with Photoshop, it will rasterise the incompatible ones on export.The plug-in is also open-source on GIThub, meaning you can tailor it to your needs.

The only issues I had were some minor instabilities and hangs on baking a pre-made FBX, which, in all fairness, may not have been Painter’s issue. I would also love to see dual-screen support. Overall, these are minor issues on a rock solid release.

This article was originally published in 3D World magazine issue 214. Buy it here.

Substance Painter have listened to user requests and delivered a godsend of an upgrade. With plenty of features that facilitate workflows, this update is a must-have despite its minor flaws.