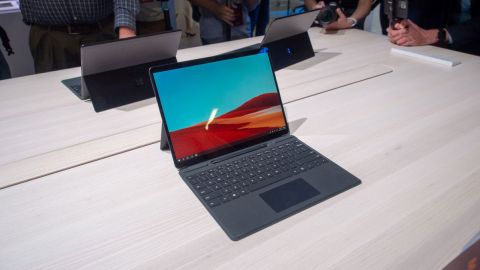 The Surface Pro X is a clear step forward from the Surface Pro design, and is one of the best looking and feeling 2-in-1 laptops we've seen. The jury is still out on whether the new ARM processor is up to scratch.

This is a hands on review of the Surface Pro X to give you the chance to see what the new 2-in-1 laptop is all about as soon as possible. We'll be expanding and upgrading this review in the future with more information and a score.

The Surface Pro X was just one of six new devices revealed at Microsoft's Event on Wednesday. And while we've all been distracted by the excitement of the new dual-screen tablet, the Surface Neo, and Microsoft's upcoming foldable phone, the Surface Duo, that doesn't mean that we aren't impressed by the Surface Pro X as well as the new Surface Pro 7 (and all these new products mean we could be seeing some top Black Friday Microsoft deals on older devices – bonus).

But what does the Surface Pro X actually offer? Could it become one of our favourite drawing tablets, or best laptops for graphic design? Read on for a first look at Microsoft's new 2-in-1 laptop/tablet. You can also watch Microsoft's introductory video below.

Typing feels slightly bouncier than before, but is overall an enjoyable experience. Plus, it's got a stylus, the Surface Pen – now called a Slim Pen as it's a bit flatter, which you can store easily within the device, where it automatically charges. When you pull out the Pen, the Surface automatically brings up the whiteboard app. The new Pen is just as good as before, and has the pressure sensitivity and palm rejection we've come to expect from the Surface Pen.

You can turn the Pen around and use the end of it like an eraser, which is pretty cool. You can also use the Pen on its side, giving you nice soft blended effects when creating artwork. We also saw at the event that the Creative Cloud works really well on this machine, with Adobe Fresco having been optimised for the Surface Pro. Fresco will soon arrive on the Surface platform.

The Surface Pro X comes in one colour: matte black aluminium, with the black Alcantara fabric Type Cover for the keyboard cover.

So on the design and display front, so far, so good. Overall, this feels like a tablet that creatives could actually use.

The starting price of the Microsoft Surface Pro X is $999, and for that, you'll get 8GB of RAM (memory) and a 128GB SSD, which is removable. These specs are similar for what the MacBook Air (read our MacBook Air review here) offers at its starting price.

The Surface Pro X is also the first to have its own custom-built processor – an ARM-based Qualcomm Snapdragon CPU that Microsoft is calling the Microsoft SQ1. Microsoft claims that this setup provides "best in class" graphics performance. It also said that it has three times more performance than the Surface Pro 6. This all sounds great on paper, but seeing as ARM-based Windows 10 devices don't historically do so well when compared to AMD or Intel machines, we will reserve judgement until we've had time to properly test it out.

The machine is also the "first Windows PC to have an integrated AI engine", creepily demonstrated during the Microsoft Event as enabling you to change the look of someone's eyes when on a video call to make it look like they're continually looking at you. Bit weird. But perhaps there are other, more useful applications.

Microsoft says the Surface Pro X will last up to 13 hours after one charge, which seems kind of okay, although you may find you want more. It also has fast charging, so after one hour you'll have around 80 per cent battery, which helps.

The Surface Pro X will be available from 5 November in stores and online, while pre-orders have already started. The starting price is $999 / AU$1,699 (about £810). Order the Microsoft Surface Pro X now.

The Surface Pro X looks great, and if we're honest, we like the sound of the specs too, and we can imagine using it as a proper tablet. However, we'll reserve judgment on whether its performance will be enough to deal with heavy creative use until after we've tested it out properly.

Thanks to our sister site TechRadar for their help with this review. Read TechRadar's full hands on review here.

The Surface Pro X is a clear step forward from the Surface Pro design, and is one of the best looking and feeling 2-in-1 laptops we've seen. The jury is still out on whether the new ARM processor is up to scratch.