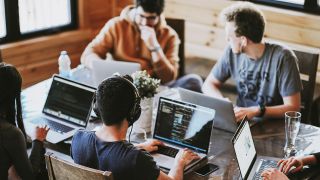 Almost every piece of creative work – whether it's a TV ad, side project or street mural – requires some sort of creative collaboration. But working alongside other creatives is about so much more than just following a meticulous design style guide. The old saying that two heads are better than one has never been truer than when it comes to creative work.

So what makes for a successful collaboration? How do you forge relationships that you’ll want to celebrate, rather than banish from your inbox? How can you choose a partner who will bring out the best in you, and you in them? Is there a ‘collab formula’ or certain traits you need to look out for? Or is it simply a case of the right chemistry?

To find out, we speak to leading creatives from around the globe about some fantastically creative collaborative projects, and discover the secrets of a successful collaboration in the process.

01. Make sure your skills complement each other

The best collaborators don’t just have complementary skillsets, they also bring out the best in each other. “Jon makes me better – it’s as simple as that really,” says co-founder of design studio Non Format Kjell Ekhorn. “I tend to get tired of my own head and visual expressions, so having Jon there to mix and remix projects with is a blessing.”

02. Use a time difference to your advantage

“We tend to either tag-team a project, or divide up the tasks,” explains other Non Format co-founder Jon Forss. “Some projects require certain skills that one or other of us tends to prefer or is more suited to.”

Being 4,000 miles and seven time zones apart, one of the pair will work on it during the day and then hand it over to be continued by the other. “We never get tired of starting a new day and seeing that some real progress has been made overnight,” says Forss.

Like many collaborations, a key part of the success of Non-Format’s relationship is mutual respect, and a non-competitive spirit. “Everything we do together is
Non-Format’s work, not our own. If either one of us isn’t happy with the way a project is going we quickly accept that it has to change to make it better,”
says Forss. “We’re both constantly open to ways that things can be developed
and improved, rather than merely defending our own position as individuals.”

04. Agree at the concept stage

The team at Non-Format also puts an emphasis on the “chatting and brainstorming” stage, meaning that any disagreements surface early on. “Perhaps one clue to our success is that both of us like to invest plenty of time on concepts and ideas both before and during the execution of a visual direction, which means that the result is never based solely on design style; design thinking is equally important,” says Ekhorn.

05. Don’t be afraid to scrap projects

The Non Format duo are also both open to shelving ideas altogether. “If we think something isn’t working, even if it took a long time to get to that point, we’re not afraid to voice our objections and to scrap it and shift to something else,” explains Forss. “Experimenting always leaves us open to the very real possibility of failure, so
we’re used to sometimes making something that just doesn’t work out.”

As a freelance art director, SooJin Buzelli is careful to guide artists, rather than solve problems for them. “When I receive sketches that are not quite on the mark, I communicate why it’s not working, not how to fix it,” she says. “I’m collaborating with the artist so the concept can be solved from their unique perspective.”

“Chris Buzelli told me not to ‘fight’ with my clients but to ‘dance’ with them early on in my career,” says illustrator Victo Ngai. “It took me years to understand what he meant – remember you and your clients share the same objectives when negotiating the disagreements.”

“Face-to-face meetings are important,” says Alice Goss, business development manager at Design Bridge. “We usually get a lot more out of half an hour in the same room than we would do on the phone.”

“Share work in progress and ideas super-often,” says Tom Sharp of The Poetry Of It All. “Don’t treat it as a client project where you need a polished presentation of work. Bounce ideas backwards and forwards. Don’t be afraid to be foolish.”

“Keep in touch,” adds Superunion’s Katherina Tudball. “Don’t just go away and do ‘your thing’. Talk about concepts and meaning before you get anywhere near execution.”